WITH the government keen to clamp down on supposedly ‘woke’ humour, here are the state-sanctioned jokes you can expect to hear on the BBC in the near future.

Not very funny, but definitely won’t bring criticism from the government. Won’t work too well with the Lib Dems as no one is quite sure who the leader is. Come on, do you?

Anyone who utters the s-word will set off a QI-style klaxon and ‘SNOWFLAKES!’ will flash up on your screen in block capitals to remind you to laugh. This will be totally hilarious to readers of the Sun, Mail and Telegraph, but will make the job of weather reporters difficult during the winter months.

Comedy shows will be encouraged to feature Mr Blobby-style national stereotypes from the EU. Tragically, many viewers will be bent double with laughter as Pierre Monsieur Frog trips over the string of onions dangling from his neck, or Herman German has an embarrassing wardrobe malfunction with his lederhosen and a sausage.

Laura Kuenssberg to get her own comedy show

The BBC’s political editor will dress as a jester, complete with a hat with bells on it, and deliver stringently non-political jokes punctuated by turns from show-off government ministers, eg. Matt Hancock juggling oranges. Worryingly, this will be a massive ratings hit.

The six people who are getting kicked off your Netflix account 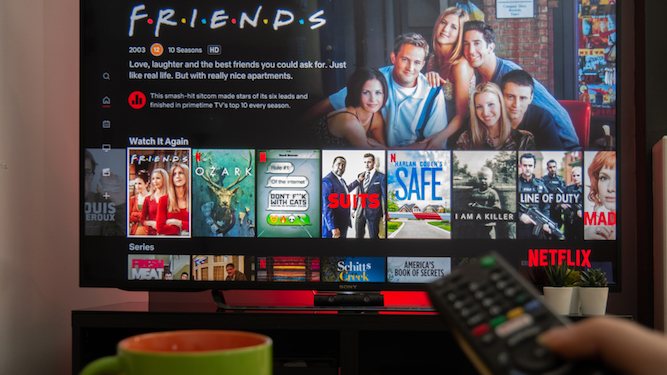 NETFLIX is cracking down on the sharing of passwords after years of unregulated access. These are the six people in your life who’ll have to buy their own:

No problem because you only gave it to them to to have something to talk about and they never watch it, or so you thought. An irritated phone call tomorrow night will reveal they are balls-deep in a German sci-fi thriller and you’ve ruined their Saturday. ‘Your mother’s very upset,’ Dad will say as she clinks mugs pointedly.

You kind of resent this freeloading bastard still being on your Netflix, but he sells you weed sometimes, so whatever. Anyway, as a heavy stoner, he spends hours deep-diving into the most obscure Korean action movies and actually functions as a curator.

You knew full well your ex was getting good use out of your Netflix account. Some nights, feeling lonely, you’d click on and see what she was watching and watch it too. You fondly imagined she’d click your account, see it, and remember when you used to watch together. But she never did.

Instead she was pining after this arsehole, who had no idea it was your Netflix account and mainly watched American reality shows about tattoo artists on motorbikes. Your ex said it was her sister’s account and because you fancied her sister you believed her.

At this point your Netflix is being passed on like chlamydia. This girl’s never met you, doesn’t know she’s connected to you by three degrees of Netflix separation, and when disconnected tomorrow will begin an angry chain of texts culminating in a break-up that was indirectly all your fault.

You’ve never met Anders and he’s never met you. But in 2018 you went to Amsterdam, logged your account onto a smart TV in a rented apartment and never logged off. That TV was bought second-hand by Anders who assumed Netflix came with it. Now it’s gone and he’s f**king furious. He was halfway through Peep Show.