The seven shittest Christmas number ones of all time

IT IS a tradition as British as the Queen’s Speech to send an absolutely shit song to number one for Christmas. These are seven of the worst:

Ernie (The Fastest Milkman in the West), Benny Hill, 1971

In the 60s Elvis, the Beatles and Tom Jones were at the top at Christmas. Our tradition of novelty crap for Christmas began here, with an innuendo-laden number about rival deliverymen vying for a widow’s love. Easily as bollocks as it sounds.

This beat John Lennon to number one just after his death, if you want a marker of what twats we’ve always been as a country. Though it could have just been because it was a cheap, and ironic, presents for Grandma.

Did we all know about the child abuse allegations at this point? Yes. Did we buy this anyway? Yes. An overblown epic with a climate change message hammered home by Jacko travelling to four different continents to shoot the video. Its only saving grace is Jarvis Cocker mooned him while he performed this at the Brits.

Now considered a seasonal favourite even though it’s unambiguously about getting your end away. The first of three festive chart-toppers by the talent-light group but the only one where you can close your eyes and imagine it going in.

Along with Mr Blobby, the child-friendly Christmas number one you’d love to forget. Irritating, stupid, sold over one million copies. Best listened to after sustaining a catastrophic head injury on an unregulated building site. 16 years later the same instincts that made this a success would bring us Brexit.

The original wasn’t great, the Stock Aitken Waterman reboot five years later was worse, and this featured a veritable ‘who the f**k’s that?’ of 00s music. The luminaries caterwauling along included Dido, Lemar, Estelle, Turin Brakes, Busted and Keane. Yeah.

It’s hard to criticise a record released for charity. Not impossible though. Ladbaby has notched four Christmas number ones in a row, all themed around sausage rolls and like sausage rolls, absolutely packed with arseholes. At least the first two had decent puns. This one? Shit.

Six questions that really need answering about the Nativity 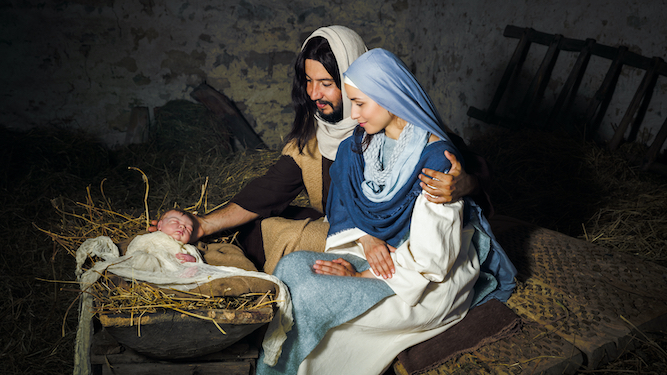 HAVE you always been a bit confused by the nativity story? Here are some issues the Bible – or its author God – really needs to clear up:

How can we be sure Mary and Joseph never ‘did it’?

They were married, there wasn’t TV or the internet, so why not give sex a go? The official church line is that Mary remained a virgin, so maybe they had sexual hang-ups. Their odd relationship needs a whole other gospel to explain called The Gospel of Relate.

Why does no one discuss what’s going on?

The nativity would really benefit from some exposition. Okay, the birth of Jesus is in a prophecy, but by who? It could be some idiot like Mystic Meg. And what’s the game plan with Jesus? What is the Messiah actually going to do? The Rise of Skywalker was clearer, and that was totally confusing bollocks.

Why does the song say ‘away in a manger’?

A minor, some might say pedantic, point, but baby Jesus wasn’t ‘away’ in a manger, he was right there.

Who were the three wise men?

Caspar, Balthazar and Lord Melchett are often believed to be kings. So surely they’d travel with a huge entourage including bodyguards? Just setting off on their own in the lawless desert with various valuables isn’t very wise at all, in fact it’s stupid. Also frankincense and myrrh are rather random gifts for a baby. Did they do a last-minute shop at Lush?

Why are we so chill about the Massacre of the Innocents?

Fearing a usurper, Herod had every male child under two in Bethlehem killed. Like, with a sword. You’d think mass infanticide might dominate the Nativity story, but it’s very much a footnote. The f**king donkey gets more attention.

Was it meant to be turned into a shit school play?

Is this how God planned to get everyone to worship him? And since He knows everything, past, present and future, does he cringe every year as he foresees your son fluffing his one line as Innkeeper while the other parents laugh at the tea towel falling off his gormless head?