WEST End theatre goers have complained after a man watched Apocalypse Now on a 42 inch plasma TV during a performance of Harold Pinter’s The Caretaker.

Emma Bradford said: “The sound of Ride of Valkyries as the helicopters attack a Vietnamese village made it hard to concentrate on the Pinteresque pauses in the show. He just didn’t seem to care.”

Booker had watched more than an hour of the film before a member of the cast was forced to break character and confront him.

Norman Steele, who plays Davies, shouted at Booker: “Do you think Marlon Brando would have put up with this?”

It was not until the beginning of the second act, when Booker’s DVD began to skip, that he decided to turn it off and watch the rest of the show in silence.

He said after the show: “Yeah it was pretty good. It could have done with a helicopter in it, but I’m glad I stayed until the end.” 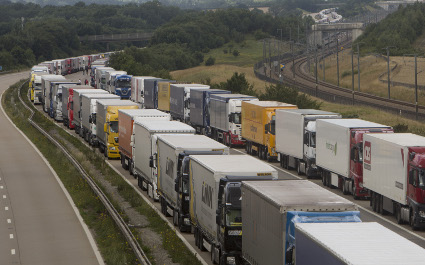 STRANDED lorry drivers in Kent have broken records for the level of violent racism in their conversations.

The drivers’ solutions to the migrant crisis and French strikes have already outstripped the worst genocidal fantasies of a raving neo-Nazi and look set to get even worse.

“That leaves the road network intact and then we get lorries jousting each other at 75mph to scrape off any migrants still clinging to the sides.

“After that we round up all the French farmers and burn them on a pyre. Then we go home with our heads held high, because we are the knights of the road.”

Race relations expert Dr Mary Fisher said: “We have hit peak racism, with each square yard of Kent equivalent to the outpourings of 160 drunk Australian women on public transport.

“However, the long-term danger is minimal because we can always distract them with a Ginsters Meat Feast.”