Titanic, and four other movies it's unreasonable to expect to remain unspoiled

FROM The Sixth Sense to The Usual Suspects, films have twist endings you don’t want spoiled. And then there are these deathly predictable movies:

The Passion of the Christ

The story of an ancient Middle-Eastern man being tortured to death on cruciform wood is quite well known. If anyone screams ‘What? Jesus H. Christ was crucified!?’ in shock as this film reaches its predictable climax, they are beyond salvation.

If you’re a human being living in the 21st century you’ve heard of the Titanic. Mainly because the unsinkable liner’s maiden voyage ended on the floor of the Atlantic Ocean. Anyone who doesn’t know the connection between the Titanic and f**king big icebergs has bigger issues than having a film spoiled.

This film, documenting Hitler’s final days in his Berlin bunker, shouldn’t contain any surprises for anyone. If somebody accuses you of dropping a spoiler by mentioning that Adolf Hitler killed himself and that Germany lost the war, what else have they missed? Do they even know Dirty Den was the father of Michelle’s baby?

A biopic of Neil Armstrong, a man exclusively known for being the first man to walk on the moon. Unsurprisingly, the film’s dramatic climax focuses on his famous lunar stroll. What else would it end with, Neil Armstrong passing his driving test? Doing some hoovering? Calling Buzz Aldrin to reminisce?

Abraham Lincoln, a man known for: abolishing slavery in the United States; wearing implausibly tall hats, and being shot dead in a theatre. Despite being only the second worst thing that can happen to you in a theatre – after having to actually sit through a play – only a weapons-grade lunatic should be unaware. It would come as a surprise to Laurence Fox. 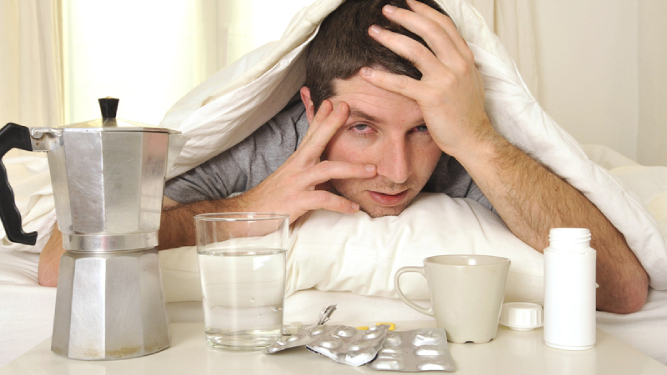 SOME hangovers don’t fade away by the end of Lorraine, or lunchtime, or even early evening. Here’s how they progress:

5.30am: Wake up feeling still drunk and like shit. Realise you’re fully clothed on the sofa. Down two paracetamol and a pint of water and head up to bed, confident they’ll do the trick.

9am: Wake up again still feeling like shit. Dizzy, aching head, stomach full of poison, dim memories of having made some bad choices on a WhatsApp group the previous night. Stomp downstairs and choke down two slices of dry toast to soak up the alcohol.

11am: Despite the gentle application of closed curtains, lying down, and Friends on Comedy Central, the hangover somehow seems to be gathering strength. Hands now shaking and acrid sweat pouring out. Consider hair of the dog but the thought makes you vomit.

1pm: Usually you feel better after a good puke. Not today. Instead it’s encouraged the hangover, which now seems confident it can win. Afraid to eat, move or sip water, you remain paralysed on the sofa, paranoid that the Chandler and Ross are talking about what a f**k-up you are.

3pm: Uber Eats delivers a bottle of Lucozade and a bag of Sainsbury’s Onion Rings, which are forced down your throat. Stomach still painful. Two more paracetamol bring the day’s total to six. An attempt to get some fresh air in the garden leaves you lying on the grass while an uncomfortable memory surfaces of you pissing out here last night.

6pm: The whole day is a write-off. The whole f**king day. No longer nauseous but unable to sleep, you choke down food in the hope that it’s hunger gnawing in your gut, not liver failure. Spend a morose evening head-in-hands muttering ‘Jesus bloody Christ’ before retiring to bed in defeat. The hangover has won.