Flytipping, and four other Olympic sports Britain would be world-beaters at

THE only reason Britain isn’t leading the medals table is because we’re not doing the sports we excel at. Here are the events we’d take gold in:

A white van, a two-man team, and 80 pounds of builder’s rubble to dispose of under pressure. Our lads would be speeding off after illegally dumping six sacks of rubbish and a broken fridge-freezer in a lay-by hedgerow before the Chinese team had even parked up.

An event that’s half about planning and half about sheer stamina. The British team would choose their routes carefully, with regular toilet breaks so nobody would be arrested for public urination, before sending their most experienced drinker ahead to the final bar to line up a double round. Team USA could never match that.

This most quintessentially British of pastimes would see a tough battle between bibliophile nations, with France and Argentina also harbouring hopes. After a silent contest punctuated only with murmured requests to pass by, our team would take the gold medal by paying 50p for a hardback first edition James Bond they can punt for £800 on eBay.

Hanging dogshit in a tree

Competing teams would be tasked with strolling around a local park, picking up their dog’s excrement and knotting it in a plastic bag, then flinging it up a tree without anyone noticing. Points will be awarded on the height and distance of the throw. Guaranteed British gold. The new dressage.

Not saying anything about it

In this harrowing challenge, a pair of athletes are given incredibly bad service in a restaurant but must continue to say that everything is fine. The Americans would be out after three seconds. The Australians would buckle, the Japanese crumble. Only brave Brits wouldn’t complain even when boiling soup is poured onto their laps. 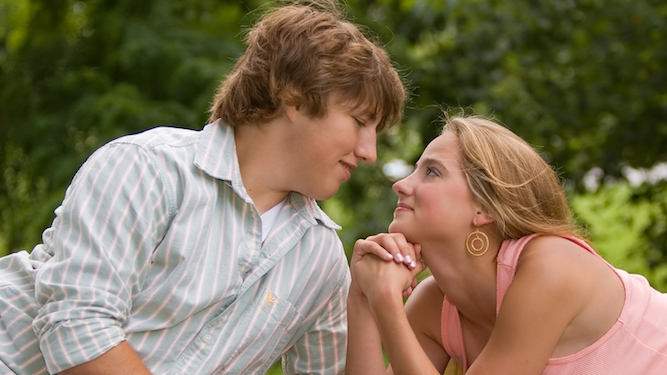 SECONDARY school is a heady mix of hormones, hairspray and double maths. Here’s a guide to ‘dating’ in your pre-GCSE days.

All relationships at this age are really for the benefit of others. So only go out with someone if their mate asks on their behalf. And only ask someone else out yourself by sending along your spottiest mate to tell them you ‘fancy them and that’. This is how relationships work.

Go out for less than a week

The shorter this romance the better. Like adult relationships you can find yourself hooked up with someone you don’t really like. So if you can end it in under a week, then perfect. A day is ideal. And you can probably fit in a whirlwind romance between first period PE and third period French.

Don’t speak to them

Been peer-pressured into holding hands with your new squeeze on the playground while all your mates look on? Remember, you don’t HAVE to speak to them. Just grunt, shuffle your feet and stare at the floor. They’ll find it romantic. Maybe.

Be too scared to kiss them

Let’s face it, you’re both too shy to actually kiss each other. Acceptable cop-out options are: (A) a snog on the dancefloor of a school disco being held at 5pm while it’s still light outside, and (B) a smooch down the side of the sports hall while 60-70 kids whoop, holler and make slurping noises.

Cry when you get dumped

Even though you didn’t really want to go out with them in the first place, you’re duty bound to be absolutely crushed when they dump you. You’ll wrap yourself in the duvet all weekend before embarking on a new, equally doomed, sexless three-day day tryst with Lucy Parry from Year 9 next week.