AN INCIDENT in a Stoke-on-Trent nightclub has left 12 trampled to death after a DJ put on The Killers’ Mr Brightside within earshot of a hen party.

Patrons have blamed the horrific scenes in nightclub Sparks on the DJ, who chose to play the inciting track despite pink sashes and penis-shaped balloons being clearly visible.

Bystander Nikki Hollis said: “Whether it’s criminal negligence I don’t know, but you couldn’t miss the hens so at the very least it was recklessly endangering life.

“There was no warning. The last track was Ellie Goulding for God’s sake, so the dancefloor was virtually empty. The moment those chiming guitars kicked in, the stampede began.

“The people in the way were tossed aside like rag dolls. They never even knew what hit them. I tried to help one man but he’d been in the path of the fat one and the stiletto wound went almost straight through.”

Survivor Joe Turner said: “All I remember was hearing the opening notes then waking up under rubble. I’m okay, but six of my ribs were broken.”

The emergency services have confirmed that the building suffered serious structural damage and will have to be demolished. None of the hen party sustained any injuries. 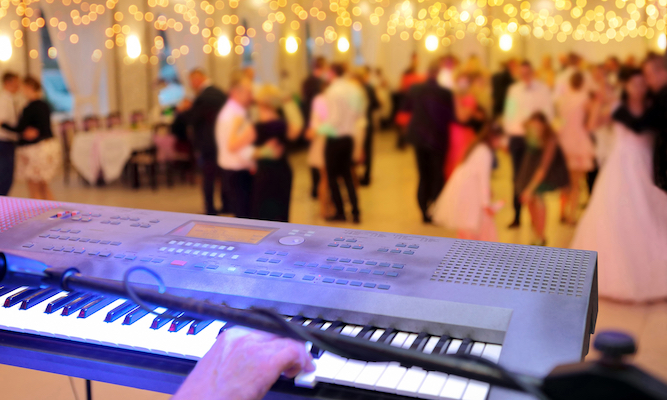 A WEDDING band is under the wild delusion that the drunken crowd they are performing for wants to hear one of their original compositions.

The Matrimonators, a band specialising in swing versions of popular classics, have been going down so well that they have decided to wow everyone with a song they play in their other incarnation as A Thousand Times Yes.

Lead singer Joe Turner said: “I’m A Believer’s warmed them up. Now it’s time to set the place on fire with Love Attack Squadron, the lead track from our upcoming digital EP.

“You might assume that a wedding crowd just wants to hear Elvis songs and Young Hearts Run Free, and you’d be right to a pretty large degree.”

“But I’m a pretty good judge of a crowd’s mood and these guys seem to me like they’re open to something a little bit different, something they don’t know all the words to.

“The drummer gets a break because it’s a percussionless tone poem, and while a lot of the guests did sit down or start heckling at least they were listening. And in the end, isn’t that all that matters?”

Drummer Martin Bishop said: “I agree with the crowd and not just because I’m now part of them.”