Vaccine passports to make all gigs middle-aged men only by September, as they should be

THE only people allowed to see live music by September will be middle-aged men who respectfully enjoy the music without any fuss, as it should be.

Plans for vaccine passports mean that only men in their 40s and 50s whose guts bulge out the front of their leather jackets will be nodding along to artists while holding their pints perfectly level.

Thomas Booker said: “There’ll be none of this leaping around and shouting come September. And singing along? I prefer to let the experts on stage do it, thanks.

“How delightful it’ll be for young, vibrant artists to step onto stage and not be confronted by a sea of mobile phones but the frowning faces of bald, bearded men paying attention.

“It’s the way live music should be. Silence during the songs, a gracious round of applause to follow, then on with the next. All the under-35s think it’s more about them and their ‘epic night’ than savouring the nuances.

“And nightclubs will be marvellous. Finally an audience appreciative of skilled cross-fader work instead of all these drugged-up kids in their 20s. Dancing? You think Tiesto wants to see you cavorting around when he’s hard at work?”

Hannah Tomlinson, singer in indie band Uncle Enzo, said: “They’re not all pissed and lairy and afterwards they queue up to pay top dollar for vinyl. It’s f**king great.”

'I am f**king obsessed with migrants and I love it' 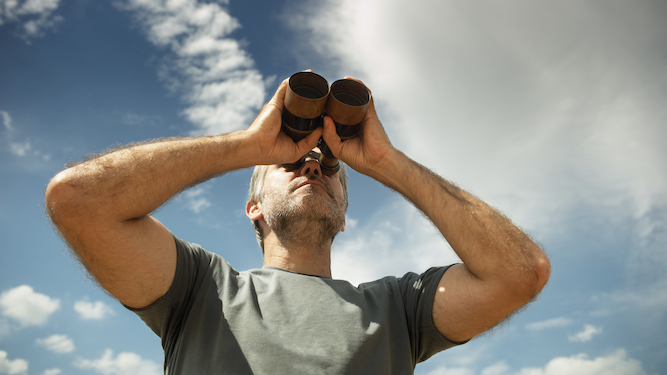 RETIRED grease trap cleaner Roy Hobbs is obsessed with migrants and regularly goes spotting on the Kent coast. He explains his rewarding hobby:

Folk say to me ‘Roy, maybe you should stop worrying about migrants and get on with your own life’. But they don’t know.

Fearing migrants has so brought my life so much joy. There’s the warm glow of self-righteous anger – how dare they come here and take over the country I was born into by chance?

It’s like a war film. As the foreign hordes descend, who’s holding them back except me and other brave patriots on cliffs with binoculars, ranting in pubs and posting cliched, semi-coherent screeds to a WhatsApp group?

As I wisely pointed out on the Daily Express comments: ‘Lot’s of young men why do’nt they stay in Sirya and fight?’ It was very well-received.

There are other benefits. I like to work out how many migrants would fill an English city. Yesterday 430 of the buggers crossed the Channel. Another year at this exact same rate and they’d need a city the size of Gloucester to house them. It’s good mental exercise, like sudoku.

It’s also helped broaden my interests in hatred. I hate the woke liberal elite who want to give them all a free house and a flashy car. I’ve even started hating the RNLI! I know!

Of course there’s the occasional downside. My wife makes me hold militia meetings in the shed and my son and daughter have stopped ringing. But these are minor issues.

So I’d highly recommend obsessing about migrants as a hobby. It even keeps you fit; I’m going for a walk now to see if I can spot any harassing the Queen’s swans. Why not join me?