BRITONS are demanding an investigation into why the Britain’s Got Talent protestor didn’t bring a harpoon gun instead of eggs.

But Britons have been left wondering why she wasn’t properly prepared, perhaps with a harpoon gun or Zulu thrusting spear.

Plumber Wayne Hayes said: “What if she’d been carrying some kind of spearing device – which she could easily have fitted into a large violin case.

“Cowell would have been skewered to his chair while Les Dennis’s ex-wife mouthed the word ‘fuck’ and a crimson-drenched PJ and Duncan mumbled something about an ad break.

“That would have been a truly memorable Saturday night’s entertainment, certainly more up my street than silhouette dancing.

“These protestors really need to get their shit together.”

However a Britain’s Got Talent source confirmed that David Walliams is contractually obliged to hurl himself between Cowell and any potential assassin.

The source said: “In the event of a weapon being pulled, Walliams is to leap across the desk and shield Cowell with his large body.

“David has prepared for his moment of sacrifice with pre-scripted dying innuendos like ‘He just whipped it out and it went off…’ and ‘That man’s put a hard thing in me and it hurts.'” 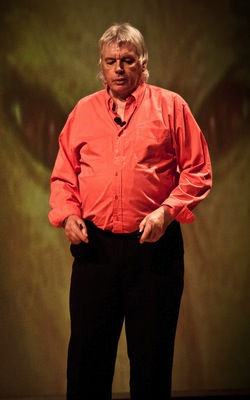 DAVID Icke has asked the BBC when he will be invited onto the corporation’s flagship political programme.

The former professional goalkeeper and sports presenter who now believes the Queen is a lizard, said he was keen to take part in a ‘civilised’ discussion with Andrew Neil and David Aaronovitch.

Icke, who claims he can ejaculate at least 1.4 million times a day, added: “I wouldn’t shout and talk over people.

“I would explain why the Duke of Kent is a space-werewolf and then I’d listen respectfully while David Aaronovitch puts forward his counter-argument.

“I certainly wouldn’t come out with a load of nonsense.”

He continued: “It’s important to be reasonable, even if the people you’re talking to are either giant lizards or the remote control slaves of the giant lizards.

“I’m not going to flip-out and start shouting ‘FREE US FROM THE LIZARDS!’ over and over again like some nutter until they’re forced to abandon the interview.”

A BBC spokesman said: “That is good to know. Seriously.”