A WOMAN drawn into conversation about Stranger Things has fooled everyone into believing she has seen it by making a series of vague 1980s references.

36-year-old Carolyn Ryan ignored the Netflix show on the basis that it was by kids for kids, but has held her own in the lengthy discussion by mentioning Stephen King, BMX bikes and the phrase ‘reminiscent of the themes of John Carpenter’.

She said: “It started as a joke. I was just like ‘yeah, Emilo Estevez, Dungeons & Dragons, Ghostbusters’ expecting them to laugh, but instead they all nodded like it was a reasoned and relevant statement.

“After that whenever the chat turned to me, I’d just say ‘I mean Tron, Rubik’s Cube, Stand By Me, the films of John Hughes’ and it was treated like actual wisdom.

“My only mistake was bringing up Timmy Mallett and Wacaday. Apparently the show hasn’t referenced that yet. Probably in season three.”

Ryan added: “In the end I threw caution to the wind and said my highlight was the comedy fat kid with a speech impediment and almost got a standing ovation.

Parents reminded that Halloween the only thing stopping Christmas 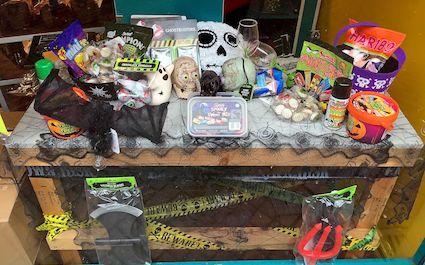 PARENTS resentful about Halloween have been reminded it is the only thing standing between them and full-on Christmas.

The festival, for which children demand costumes, special buckets, spooky house decorations and bags of sweets, may seem nakedly commercial but is nothing compared to what follows, the British Retail Consortium has confirmed.

A spokesman said: “You should be thanking your lucky stars that Halloween’s got so big. Otherwise you’d be neck-deep in Christmas right now.

“You’ve bought, what? A few decorative bats? A pumpkin? An overpriced zombie outfit? That’s nothing. In two months you’ll blow twice that on a relative you hate.

“Halloween is the black, skull-decorated dam holding back a deluge of commercialism that will wash away all your intentions of ‘keeping to a budget this year’.

“Be thankful for it. Otherwise it’d be jingle bells for four straight months immediately from Reading and Leeds.”