Your dad's agonising attempts to be liberal about Pride

AS a 68-year-old heterosexual dad, you wouldn’t think I’d be supporting Gay Pride. But I’m actually very liberal about nancy boys. Here are some of my broadminded views.

You can’t turn gay from gays on TV

I used to believe this. It’s ridiculous when you think about it – I watched Strike It Rich with Michael Barrymore for years and I didn’t feel the slightest bit effeminate. It definitely didn’t make me wear a dress or hang around public toilets, and Barrymore’s bent as a safety pin. So as you can see, I’m a lot more liberal these days.

When I watch Pride on TV I’ll be saying supportive things like ‘You go girl!’. That’s called ‘camp’, which is when gays pretend they’re women. Of course, some of them are women. You can spot them because they’ve got short hair and dungarees. Yes, I feel I’ve got quite a deep understanding of gay culture.

Gays have contributed so much to society

Alan Turing cracked the Enigma code. Jodie Foster was in Silence of the Lambs. Sam Fox had massive knockers. All gay, and I bet there’s loads more. I’m not saying every single homosexual has to be a high-achiever, it just shows there’s more to being gay than liking men’s arses.

They’re not all trying to have sex with you

Apparently not all gay men have an overwhelming urge to sleep with every single overweight hetero bloke droning on about Aston Villa, immigration and the wife wanting an extra power socket in the kitchen. Surprising, I know, but it means I can use the men’s toilets in the Bull & Weasel without constantly looking over my shoulder.

This might shock you, but not all gays dress like Liberace or the Village People. In fact hardly any dress as Red Indians at all. They tend to reject these looks too: full drag; leather cap and bondage harness with bare chest and buttocks; Julian Clary’s gimp outfit. And what about Rock Hudson? No one had him down as a shirt lifter. What I’m saying is: let’s stop being obsessed with gay stereotypes.

A turning point for me was Freddie Mercury turning out to be gay. Nobody saw that coming – he just looked like a normal bloke who liked a pint. I’m partial to a bit of Queen, and Freddie wrote classics like We Will Rock You and Fat Bottomed Girls (I admit that one’s a bit confusing). The point is: if Freddie could put on a good show at Live Aid, gays must be alright. That’s just being logical.

Eye of the Tiger: The songs every prick has on their running playlist 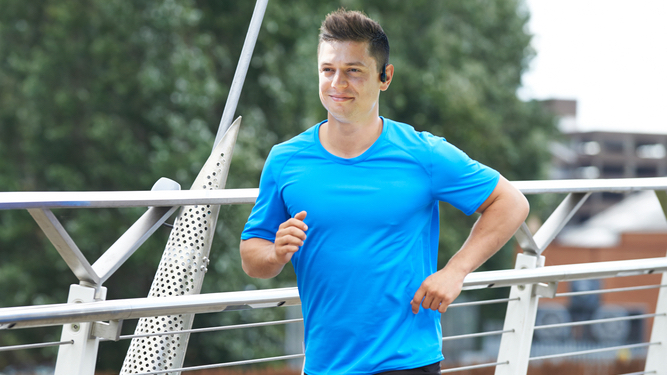 WANT to motivate yourself to achieve some minor fitness goal? Download these tracks and imagine you’re at Olympian levels of fitness and not another decrepit jogger gasping for air.

You’re going for your first run. You need music to pump you up. You Google ‘Music that will pump me up’ and put the high-octane Sabotage at the top of your playlist. Within about 30 seconds of starting you realise you’ve set off way too fast. As the song reaches its climax, you’re on your knees vomiting behind a hedge.

Eye of the Tiger – Survivor

As the sounds of some of the finest power chords the 80s had to offer rattle around your head, you imagine yourself in an intense, Rocky-esque training montage. Until, that is, you’re overtaken by an elderly lady walking her sausage dog as you wheezily shuffle around the path of your local park.

When the members of Queen wrote this soaring, uplifting song, they were doing it for you: a man feebly jogging on a gym treadmill leering at women who undoubtedly find you irresistible thanks to your new trainers and lycra shorts. It is indeed possible nothing will stop you now, although the gurgling from your stomach says last night’s vindaloo has other ideas.

Bruce probably penned this song with a metaphorical use of the word ‘run’. As will be obvious to anyone looking at you stumbling puce and breathless along the pavement. They’ll correctly draw the conclusion that you were instead were ‘born to slump on the sofa eating a whole bargain bucket of KFC’.

This song’s thumping energy will surely be enough to propel you through the pain, right? No. You’ll soon discover there’s nothing more humbling than standing hands on hips at a pedestrian crossing, gasping for air and desperately hoping that the light doesn’t turn green and make you have to run again, while Eminem screams in your ear like a shit Mr Motivator.