The Live & Kicking phone-in number, and other useless shit you're incapable of forgetting

IF asked to recite the Live & Kicking phone-in number on pain of death, you’d blurt out ‘0181 811 8181’ in a second. Here are the utterly useless things you can easily recall.

After watching religiously every Saturday morning for eight years, this phone number is seared into your brain in the same way as your own birth date. In fact, you can recall it quicker than your wedding anniversary, which greatly upsets your partner.

The lyrics to Ice, Ice Baby

Before you developed some taste, this was the coolest song you’d ever heard and you quickly memorised the lyrics. Unfortunately that means that the words ‘Flow like a harpoon daily and nightly’ now take up the place in your brain where your debit card number should live.

You watched every series of Friends so many times that quotes from it are more likely to come out of your mouth than verbalisations of your own unique thoughts. Your partner could be down on one knee proposing and rather than happily yelling ‘Yes!’ you’ll snarkily mutter ‘Oh, I wish I could, but I don’t want to.’

You’re trying hard to remember the sensitive speech you’ve devised to gently dump your partner, but all that’s coming to mind is ‘’Twas brillig, and the slithy toves. Did gyre and gimble in the wabe’. Vital for the primary school assembly where you recited it in 1988, not so great for consoling your weeping soon-to-be ex.

The weird sexual fantasy your friend shared with you when pissed 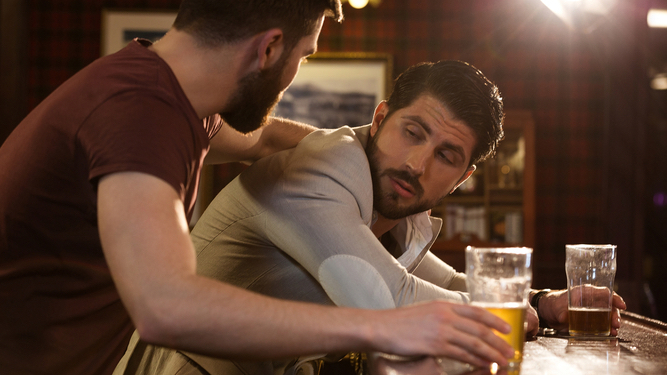 THE deputy chief whip has resigned after groping two men while thoroughly hammered on a Wednesday night. Normal people do not do this. Or these things:

Drinking is Britain’s national pastime. Every Friday we celebrate it being Friday by chugging gin from the bottle on the bus home. But intoxication doesn’t make the drunk person slur racial slurs unless they’re already inclined that way. You could get Neil Kinnock as pissed as you like and he wouldn’t say the N-word.

Everyone’s had that one mate who suddenly, a few drinks in, when you’ve popped by a gay bar, is locked in a same-sex clinch. And what you said wasn’t ‘I think Ben’s had one too many’ but ‘I think Ben might be gay’. Because being smashed has no effect on your sexuality whatsoever. Ben’s out now. He’s very happy.

There are blokes who lunge. Usually they’re spotted well in advance of working up their Dutch courage. The vast majority of men can get blackout pissed with female friends and colleagues without waking up the next day thinking ‘Oh shit, did I tit up my sister-in-law again? I have got to stop doing that’.

Drunks have fights. It’s well-known. Anyone who’s seen them knows what pathetic fights they are, but they still count. But booze’s reputation for violence rests on a radgey few who use six pints of Stella as an excuse to get punchy. Gandhi could have got properly tanked and wouldn’t have ended up in a scuffle in a pub car park.

Drink’s often blamed for a gentleman stumbling into a brothel and, apparently unsure of where he even is, innocently booking a five-way all-nighter specifying dyed blondes with their roots showing. It’s a hammered pastime most somehow manage to avoid by not knowing where a brothel is so well they can get there on automatic pilot.

Climb into the boot of a stranger’s Mercedes and throw toys out of it while shouting ‘I’m the Bishop of Southwark, it’s what I do’

Yeah, this one’s just the Right Reverend Thomas Frederick Butler, Bishop of Southwark between 1998-2010, on a single night in 2006. But what a night.