Youth benefits cuts would cause electro-swing

BRITAIN’S music scene will be limited to people with trust funds if youth benefits cuts go ahead.

Music industry experts have warned that the Tories’ ‘earn or learn’ policy would force bands without rich parents into conventional employment.

Record label boss Tom Booker said: “Without the meagre state funding they need for a shitty shared flat and drugs, musicians from low-income families will be unable to revolutionise youth culture.

“Meanwhile musicians from good homes, who either have personal trust funds or rich parents with a misguided belief that all creativity is good, will flood the charts with gypsy jazz, electro-swing and pastoral folk.”

Booker predicts that the UK music scene, once the most progressive in the world, will become the preserve of beautiful but dull girls called ‘Jessabelle Fox’ killing time before they either get married off to a banker or enter rehab.

Jake de Bournville-Cobb of gypsy-electro-jazz act The Keta-Peasant Troubadours defended his music: “It meshes trumpets, storytelling, banging beats and pretending to live in a truck.

“If we weren’t doing this we’d be working in marketing or the financial sector. So the world would probably be worse off overall.”

Tom Booker said: “‘Earn or learn’ is bullshit. It should be ‘earn or learn or be in a band with genuine potential.'” 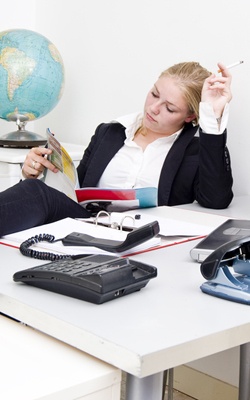 THE Tories are facing a massive fall in public support after their slogan ‘For Hardworking People’ excluded almost everyone.

The majority of the UK population  are employed full-time in roles where they coast along with minimum effort.

PR account manager Joanna Kramer said: “I did nothing at school, fuck-all at university, and I find that the office is a lovely place to spend languorous days talking about the X-Factor, though of course I do work from home a lot as well.

Its how Ive chosen to live my life, and as a fellow PR twat I expect David Cameron to respect that.

“Now, if youll excuse me, I have to leave early for a 2pm hair appointment.

The hardest workers are those on low incomes or immigrants, who are generally despised for making everyone else look bad.”

Senior Tories are rushing to assure the public that its fine to sit around pulling your pud all day if youre in paid employment, have inherited wealth, or are attractive enough to leech off somebody else.

But privately Conservatives are unworried about the fall in support, because none of the lazy bastards will bother to go down to their local primary school and vote.