THE BBC has responded to claims of liberal bias with a pledge to stop portraying senior Tory MPs as homicidal deviants.

It has become part of BBC culture in recent years to portray anyone on the right-of-centre as a blood-thirsty psychopath or crazed sexual oddball.

Last week David Davis, the Shadow Home Secretary, was introduced on Radio Four's Today programme as, "the man who posted his underpants to Victoria Wood".

Meanwhile Theresa May, Shadow Leader of the House, has protested to the BBC after children's programme Blue Peter accused her of master-minding the Kennedy assassination.

In a memo to staff, Director General Mark Thompson wrote: "In future we must be careful not to imply that any Conservative Party member has killed or wants to kill another human being, unless we have irrefutable evidence."

He added: "BBC journalists should refer to Conservatives as simply being 'under suspicion' rather than having 'blood on their hands'.

"This will go a long way to restoring confidence in public service broadcasting."

Media commentator Wayne Hayes said: "The BBC has changed a lot since the days of founding father Lord Reith.

"Back in the 1930s black people were used as buffet tables and left-over electricity was used to execute communists in the basement of Alexandra Palace." 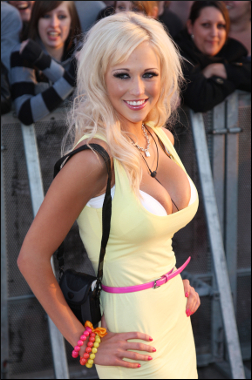 COLDPLAY frontman Chris Martin has delighted his army of fans by confirming he is to write a song all about tits.

The internet has been buzzing with rumours of a Coldplay tits anthem after Martin's brief holiday with David Coverdale from Whitesnake.

Seasoned Coldplay observers were last night speculating on the lyrical content of the new song.

"There is absolutely no chance that he would call it 'Knockers'. That's just not Chris Martin."

But Roy Hobbs, the Daily Mail's Coldplay editor, insisted: "I think it will be called 'Breasts' or maybe even 'Gazongas' with a really uplifting chorus about how, in Chris's opinion, tits are fantastic."

Martin is determined to answer critics who said he could never fulfill his potential as a musician until he had penned at least one classic song about tits.

Expectations were high that X&Y, the band's all-conquering 2005 release, would be largely about tits, but instead it was about feeling awkward and unhappy about a diverse range of issues.