2008 To Be A 'Litany Of Unremitting Shitness', Say Experts

THIS year will start shit and then get shitter until it gets so shit that eating a shit sandwich will seem like a blessed relief, a leading expert said last night.

Professor Henry Brubaker, director of predictions at the Institute for Studies, said: "Everything you can think of will be much worse than you can imagine it could be, including dog farts and prime-time BBC1."

The Brubaker Predictions for 2008 include:

Brubaker also warned that unemployment will soar among the non-Chinese and everyone will get an unpronounceable disease after trying to distract themselves from their misery with night after night of anonymous, meaningless sex.

The few people whose private parts are not eaten by sex germs will fall victim to a virulent new human form of Venezuelan Cock Flu.

Brubaker added: "By early August most of Africa should have burned to the ground, while Pakistan will be threatening nuclear war after a dismal summer test series.

"Meanwhile the Americans will elect either a Mormon, an Italian or a ghastly woman.

"On the positive side, no one will be boring you to death about house prices, because there won't be any."

Chancellor of the Exchequer, Alistair Darling, said: "My New Year's resolution is to stop shitting myself three times a day." 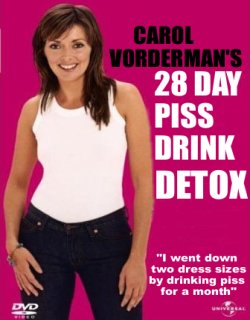 AS millions of Britons begin their New Year detox, a record number of health conscious consumers are signing up for a month-long regime of drinking their own urine.

The Vorderman plan, priced at £112.40, is now the most successful in a long list of celebrity piss-drink regimes, including the Tony Benn Way®, Danni Minogue's Magic Bottle™ and Sting and Trudi's Rainforest Piss Festival®.

Under the Vorderman detox, you can eat a normal daily diet of chocolate and pork. But instead of coffee, alcohol or a soft drink, you force down a pint of your own juice.

For an extra £129.50, well-heeled consumers can upgrade to the Platinum Club™ giving them access to the exclusive Vorderman Piss Vaults®.

A spokesman for Vorderman Industries™ said: "Carol has been storing her urine in one gallon demi-johns since the late Nineties.

"In fact, we now have 57 air-conditioned Portacabins™ sitting in an industrial estate in Macclesfield, stuffed full of Carol's golden fluids."

Platinum Club™ members will receive a one-litre bottle of Vorderman piss which they should use to top-up their own three or four times a day.

The spokesman added: "Carol Vorderman's 28-Day Piss-Drink Detox™ not only helps those who desperately need to drink piss for about a month, it's also a tremendous boost to Carol's ongoing appeal for £50 notes."