And Yet Oliver Prevails, Everyone Tells Sainsbury's

SO you can ban some woman for using the wrong Nectar card while ‘it’ continues about its business unmolested, everyone told Sainsbury’s last night.

As the supermarket giant banned Christine Turton from every one of its stores, consumers across Britain said that if the company was in the mood for grand, sweeping gestures, then from their point of view there were far more pressing matters at this particular juncture.

Helen Archer, from Peterborough, said: “The board will have discussed this and I’ll bet you at no point did a single one of them say ‘actually, while we’re on the subject of people outstaying their welcome’.

“Instead they will have congratulated themselves on victimising some innocent Liverpudlian – there’s an odd little phrase – while remaining oblivious to the fact that everyone in Britain despises every atom of their worthless Oliver-enabling bodies.”

She added: “I desperately want to go to Sainsbury’s, I really do,  but I just can’t have that thing’s face on my chicken.”

Martin Bishop, from Stevenage, said: “Are Nectar points even real? I’ve been collecting them for 18 years and so far I’ve received about 85,000 emails and managed to get 4p off a mountain bike.”

He added: “Whenever I hear ‘it’ use the word ‘taste’ I get a raging flush of the heebie jeebies. If you want me to buy your sausages, then best not to show me a close-up of that thing slurping one of them into its fat little head hole.

“And, I never thought I’d say this, but I’m getting pretty fucking sick of the Polyphonic Spree as well.”

Bishop is currently collecting signatures for a petition calling for ‘it’ to be replaced by gangly, pale-faced contrarian Will Self, sneering at customers from behind the fish counter to the strains of Where is My Mind by the Pixies. 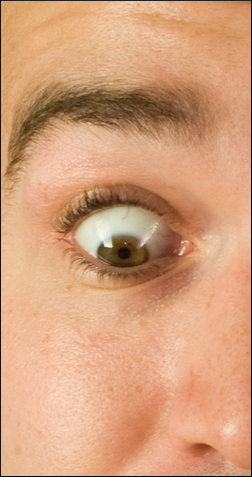 BBC director general Mark Thompson has admitted that most of the licence fee money has been spent on crack cocaine.

An inquiry was launched last month after state of the art BBC-branded camera equipment and a satellite truck were discovered at the White City branch of Cash Swappers, while visitors to Television Centre noticed that the building appeared to be mostly empty, smelt of fecal matter and was partly on fire.

The director general said: “When you have a lot of money around, things go wrong. It’s a law of the universe or something.

“There were bad people coming over, hanging out in the edit suites. I suppose… I suppose it’s like, a thing or whatever, you know. Shit.”

Thompson stressed the BBC would make it up to licence payers by lowering the annual fee to a beer, or whatever spare change people happen to have on them.

Insiders say the corporation’s problems began shortly after the appointment of new Head of Interactment Envisionisation, Pete ‘The Viking’.

“After some thoroughly half-arsed improvisational exercises he asked us if we wanted to feel really, really good, better even than if we’d just edited a particularly strong Afghanistan package for Newsnight.

“A couple of days later no-one was even bothering to do the news and there were poos everywhere.”

Television fan Tom Logan said: “I had wondered why last week’s Antiques Roadshow was a ‘pipes only’ special, with Fiona Bruce very evidently missing half her teeth.

“It was much better.”