ENGLAND manager Fabio Capello feels England could soon compete against the likes of Burundi or even Burkino Faso following last night’s demolition of the Hungarians.

Two goals by Steven Gerrard ensured one of the footballing shocks of the year as England crushed the 62nd-best team in Hungary.

Many are even comparing it to 1972’s ‘Miracle Of Hampden Park’, when Scotland defied all the odds and silenced their critics by successfully completing a pass.

Captain Gerrard said: “I think we showed tonight that we know how to do the throw-ins and the goal kicks quite well.

“I would also point out that almost half the team realised which national anthem they were supposed to sing. I am both pleased and proud.”

Capello praised England’s performance, saying: “The younger players showed great ability in getting dressed by themselves, though Gibbs did have his boots on his ears, but that’s something we’ll be working on with his club.”

Meanwhile FA chiefs were delighted with the margin of victory, stressing it would have been even higher had Hungary not scored a goal clearly awarded by a foreign criminal.

Capello added: “I think we have finally hit upon a winning formula as long as before every match I can end the career of a senior player while the captain encourages the fans to tell the players how awful they are.” 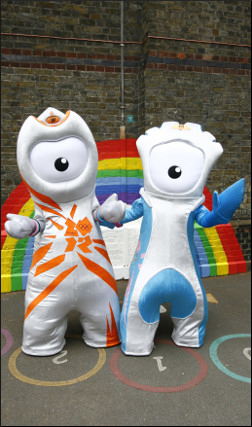 TOURISM chiefs have unveiled a new guide reminding Britons not to just punch people who are here on their holidays.

The glossy A3 booklet Dealing with Temporary Scum will give tips and advice to UK citizens in the run up to the 2012 Olympics and the influx of a load of foreign tourists looking for a right good kicking.

The 36-page publication tells the story of a drunken night out with violent Olympic cyclopses Wendigo and Hemlock, as they complete a circuit of chain bars with their mates, drinking as much Stella as possible and encountering various other nationalities en route.

Wendigo takes the ‘good cop’ role, remonstrating with Hemlock after he indulges in a series of misdemeanours such as repeatedly smashing a Metz bottle over the head of someone he believes to be French but who is actually Japanese, or offering some Canadian girls the opportunity to see his ‘other one-eyed bodypart’.

A spokesman for Visit Britain said: “It’s easy to forget that casual violence can offend, and that in some countries you can go into town Saturday night without having first completed a will.

“Similarly many foreigners do not consider any oily, ambiguous matter to be food simply because it’s in some pitta bread, shows no visible signs of life and is slathered with ‘the hottest fuckin’ sauce you’ve got mate’.”

He added: ‘It’s important to remember that many tourists will have arrived in Britain without any idea of how utterly vile it is.”

The leaflet also gives general advice on issues such as language: “Do not judge foreigners harshly because they are too lazy to learn English, the one true language of proper humans.

“Use their faltering attempts to request simple information as a source of humour, and point them in the direct opposite direction to Ripley’s Believe It Or Not, and then check the next day’s Evening Standard to see if they got mugged.”