ANN Summers is moving upmarket with a new range aimed at the middle classes, including a stunning open-crotch evening gown.

The ivory silk, floor-length dress is designed by Stella McCartney and features a heart-shaped hole in the front to provide easy access to a lady’s private area.

A version with a rear hole will be available later in the year for Scandinavians, Roman Catholics and public school girls.

Nikki Hollis, Ann Summers' marketing director, said: "This season everything is luxurious and at the same time filthy and obsessed with bum sex.

"We have crotchless riding breeches, a naughty saddle and some lovely open-crotch plus fours if you require intercourse during a round of golf.

Hollis said the company was targeting the middle class after research showed more than half were still supressing their most deviant sexual appetites.

She added: "The working class have the morality of crazed chimpanzees and will do anything to anything.

"Meanwhile, the upper orders are rich, degenerate and obsessed with the anus, but most of them are happy to use fruit or an antique candelabra."

How To Avoid Gerry This Summer 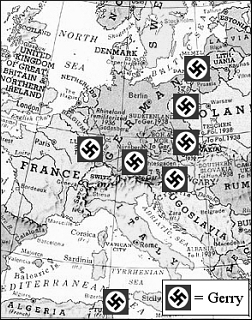 THE Foreign and Commonwealth Office is advising British holidaymakers to steer clear of continental Europe this summer, warning that it may be full of Germans.

The Hun has nabbed the deckchairs and booked out the best hotels in Austria and the Sudetenland, and is busy colonising the delightful beaches of Danzig-West Prussia.

Viscount Halifax, the foreign secretary, told the House of Lords: "Fritz has made himself very much at home all over the Rhineland, so I'm afraid you'll have to look elsewhere for a good, meaty sausage and a decent bottle of Gewürztraminer.

He added: "According to our latest communiqués, Poland will soon be awash with Löwenbräu, as Gerry hogs the billiard table, puts his towel on the sun lounger and rounds up the local partisans."

The foreign secretary issued further details of those holiday destinations to be avoided at all costs, including:

PRAGUE: Ghastly Reichsprotektor Heydrich ensconced in presidential palace and playing Brahms at full volume until early hours of the morning.