America Waits For Clinton To F*ck Off

AMERICA was waiting with bated breath last night as Hillary Clinton signalled she may be about to fuck off.

Sources close to the New York senator suggested she is now ready to pick a date to concede the election, and has already pencilled-in April 23rd, 2017.

But senior Democrats are urging the former first lady to just fuck off the minute she wakes up. Nancy Pelosi, Speaker of the House of Representatives, said: "Finally. Jesus.

"I told her to give up about two months ago, then again about three weeks ago. Eventually I had to send her a postcard which just said 'FUCK OFF' in big capital letters."

Pelosi's intervention led to an avalanche of postcards from across the country as thousands of ordinary Americans implored Senator Clinton to fuck off urgently.

Army veterans sent big 'fuck off' flags while schoolchildren made drawings and paintings for the senator telling her how much they would love it if she just fucked off.

And even Hollywood got in on the act with film-makers Steven Spielberg and George Lucas including a 'Fuck off Hillary' message during the closing titles of their latest Indiana Jones adventure.

Meanwhile Democratic nominee Senator Barak Obama is to kick off his general election campaign with a five-day swing through the southern states, already dubbed his 'Please Don't Kill Me' tour.

Mosley To Mount A Donkey Before French Grand Prix 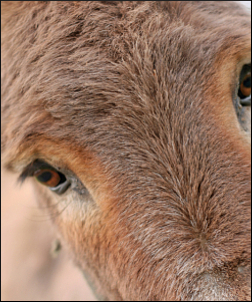 MOTORSPORT boss Max Mosley is to mount a donkey before the French Grand Prix later this month.

Mosley is keen to explore undiscovered areas of his sexuality, secure in the knowledge he has the full backing of the FIA.

The FIA president is now planning a full-scale donkey sex demonstration on the grid at Magny-Cours, minutes before the cars line up.

It is understood Mosley has picked out a three year-old donkey from a farm in Hampshire and will spend the next two weeks testing step ladders.

An FIA spokesman said: "What a man does in the privacy of his own freaky sex dungeon surrounded by  whores has nothing to do with his job.

"We've checked his time sheets and all the twisted sado-masochism took place during lunch or after 5pm."

The spokesman added: "Would you like to urinate on my chest?"