Bank of England 'thought Libor was a brand of toilet cleaner'

THE Bank of England inadvertently sanctioned the manipulation of interest rates because it thought Libor was a powerful disinfectant.

It has been revealed that Barclays traders believed they had the go-ahead to falsify interest rates after the Bank’s deputy governor Paul Tucker said Libor should go ‘below the rim’.

A source said: “Barclays chief Bob Diamond asked Tucker what they should do with Libor and after a very long pause Tucker said ‘follow the instructions on the bottle and then flush twice’.

“Bob assumed this was some sort of code.

“Tucker then said that without squeezing the Libor everything would become ‘very stinky’. Bob, quite rightly, took this to be a ringing endorsement.”

A Bank of England spokesman said: “London Inter-Bank Offered Rate? I have no idea what any of that means. What, for example, is a ‘London’?

“If someone says a word that you have never heard before it’s perfectly normal to assume that it’s a cleaning product.”

Meanwhile, experts said that the Bank’s accidental complicity in defrauding everyone means the financial industry will now have to be regulated by Kevin McCloud from Grand Designs. 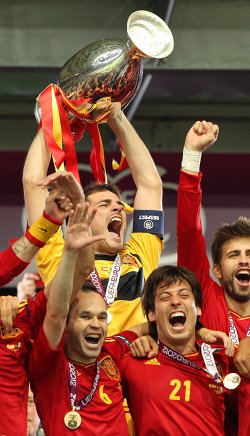 EURO 2012 winners Spain have come under more fire for showing a reluctance to mix things up by being bad at football.

After winning their third tournament in a row, the sides brand of possession trophy-keeping has had pundits longing for the more traditional style of 11 people who have no idea what they are doing.

“They’ve done this by tediously investing in a long-term strategy of training youth players to focus on technique, ball control and teamwork. Well, anybody could do that, couldnt they? Obviously England wont because it’s much more interesting for the fans to watch a constant procession of grinding mediocrity.”

He added: “Spain were only able to score a succession of brilliantly crafted goals because Italy got so bored they just nodded off.”

Meanwhile, the defeated finalists will come to terms with their loss by sitting in stunning hillside villas staring wistfully across a sunkissed landscape, the Italian FA has confirmed.

The side were heavily beaten by a Spanish team that will take their winners medals home to a land of equally breathtaking beauty but with slightly inferior cheese, much to the consolation of the Italians.

Manager Cesare Prandelli said: “It was always hard for the lads, coming into the final as beautifully-chiselled, stylish and wealthy underdogs but I think by the World Cup theyll come back stronger, better and more irresistibly handsome.”

The conclusion of Euro 2012 means television schedules may now dip below the danger level of 90% sport, leaving desperate viewers with just Wimbledon, Formula 1, the Tour de France and 24-hour cricket.

Experts have urged the public to go to their local park and video themselves playing badminton until the beginning of the Olympic cycling events.