Banks To Replace Charges With Fees

BANKS are to replace charges with fees in a major shake-up of ripping people off.

The high street banks currently make £10 million a day by charging people £30 for writing a letter telling them they are £29.95 overdrawn after debiting their account for the £30 cost of the letter.

Under the new system the banks will now make £15 million a day by charging the current account holders a 'fee' but, in a radical shift in banking practice, they will not even bother to tell them why.

Tom Logan, from the British Bankers Association, said: “Banks currently make all their money from harassing poor people and stupid women with too many shoes.

“It’s all rather jolly, but it is not a sustainable business model.

“By charging people whatever we feel like, when we feel like, we can earn millions in fees on top of the millions we earn in interest from lending out people's money to other people.”

He added: “It’s a win, win situation, but mainly for the banks.”

Meanwhile engineering firms have begun producing specially strengthened lampposts to take the weight of dozens of bank executives about to be strung up by seething, blood-thirsty mobs.

Nicole Richie's Baby Heavier Than Her 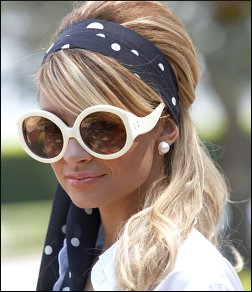 SIMPLE Life superstar Nicole Richie has given birth to a baby girl almost four pounds heavier then she is.

The baby was born after a 16 hour labour during which Nicole repeatedly asked her friends: "Am I getting any thinner?"

According to hospital sources Nicole breast fed the infant before accusing it of being 'a tubby cow' and sticking her fingers down its throat.

"Nicole is doing well and has asked for a mirror and a bucket," said boyfriend Joel Madden, a fat man that Richie took in off the street.

The baby, named 'Giganto', is expected to begin therapy sessions early next week.

Meanwhile California's gynaecologists have welcomed the birth as a milestone in celebrity gestation.

Dr Wayne Hayes said: "The last thing a celebrity mother wants is to envy the slim, toned figure of her own baby."

He added: "In recent years we have been able to deliver several babies who were only a little bit lighter than the mother. The Richie baby is very much our Apollo 11."