BARCLAYS last night signalled a shake up in the banking industry by cutting its unauthorised overdraft fees from criminally immoral to sickeningly outrageous.

Britain's biggest bank said the development of new technology has allowed it to stop behaving like a common street thug absolutely all the time.

From next week customers who go beyond their overdraft limit will be charged just £8 each time the Barclays computer says 'no' to another computer.

A spokesman said: "Thanks to hi-tech innovation our computer can now say 'no' a lot faster than it used to.

"Before it used to go 'nnnnnnnnnnnooooooooooo', which would cost roughly £35 in computer time. Now it just goes 'nope', really quickly."

He added: "Anyone who says it only costs £2.50 for a computer to say 'no' obviously doesn't know very much about computers and stuff."

Meanwhile Barclays has reassured its shareholders that any lost revenue would be recouped, probably late at night in an alley, with the business end of a cricket bat.

Power Of Thought Fails To Free Monkey From Terrifying Laboratory 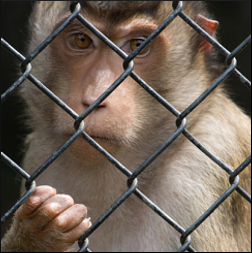 A MONKEY has failed in its bid to escape from a laboratory using nothing but the power of thought.

Ian, a four year-old capuchin, attempted the telekinetic feat after using his thoughts to operate a robotic arm and feed himself a banana.

He said: "In case you were wondering – yes, having all those pointy electrodes rammed into your brain does hurt like a bastard.

"If it didn't, then why the fuck am I the one wearing the electric helmet?"

Anyway – after my excruciatingly painful success with the banana, my next thought was 'get this bloody thing off my head and unlock the door to the laboratory'. Thus far, no joy."

Ian added: "Oh and by the way, I'm not a huge fan of bananas – I was just absolutely starving.

"I actually prefer an oatcake with a wee bit of Cambozola. But it was nice of you to make that assumption. Racists."

Ian's banana eating feat has been hailed as a crucial step towards turning the special effects of Star Wars into reality.

Professor Henry Brubaker, of the Institute for Studies, said: "We're slowly getting to grips with the Force, but our light sabre is still a bit pathetic.

"It makes a great noise but it can barely cut through porridge."