A NUMBER of Bovis houses have appeared on shelves at TK Maxx after recent damage to the brand.

The homes, which range from two-bedroom apartments to four-bedroom detached houses, are in the store’s Home section and are heavily discounted from their original asking price.

Shopper Francesca Ryan said: “They looked great at first and I thought I’d come across a real bargain. For that price I was going to get two and worry about what to do with them later.

“But when you looked closely the build quality really wasn’t great and they were weirdly put-together; stairs in the dining rooms, back doors at the sides. Some of the en-suites just had three toilets in and nothing else.

“I soon realised these were end-of-the-line houses they’d unloaded at discount. If I bought one I’d never use it and eventually give it to a charity shop, like that green Miu Miu dress.

“So I just left the one I’d picked up on the floor by the handbags. Someone else can put it back.” 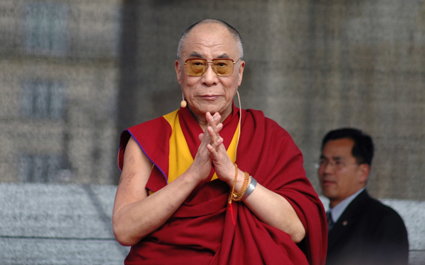 THE Dalai Lama has claimed that he is not bothered about getting 50,000 likes for his last Facebook post.

His Holiness said the comments appealing for world peace just came to him in the bath and he’s not even arsed how many people liked it because he’s a Buddhist.

He said: “It’s nice that people are into it but it doesn’t really matter, does it? I wasn’t even bothered when I met the Beastie Boys.

“I’m more into meditating on the impermanence of all things than getting ‘thumbs up’ emojis on social media.

However a source close to the Dalai Lama claimed: “He’s full of shit. He’s always googling himself and is made up when people like his updates.

“I got 150 Likes for passing my driving test and I was made up with that, so I am not having it that he’s not chuffed about getting over loads for some stuff he cut and pasted.”