BP Execs Look At Massive Oil Slick, Then At Each Other

BP executives are today standing on the Louisiana shoreline, looking at each other with furrowed brows and occasionally skimming a pebble across the oily water, it has been confirmed.

The small group of men, three of whom have their hands on their hips, have so far been unable to find a solution to the enormous environmental calamity that is basically their fault, despite having stared at it for hours.

Sources have suggested they may now be displaying the early signs of getting a bit pissed off with each other.

Earlier in the day, while feigning an intense interest in his left foot, operations director Stephen Malley said, only half-jokingly: “What if we get a shit-load of blue dye? Then at least it would look better.”

BP deputy managing director Tom Logan did not even bother to comment on Malley’s suggestion, but just exhaled loudly, and then dragged his hands down his face while muttering something about ‘pricks’.

Roy Hobbs, the company’s chief engineer, then took off his jacket and rolled up his sleeves in a decisive manner, before squatting on his haunches and drawing a rudimentary house in the sand, before adding a chimney stack and a whisp of smoke.

And about 20 minutes later, after what seemed like an eternity of awkward silence, BP’s head of communications, Joseph Turner, crossed his arms, rocked back on his heels, blew some air out of his cheeks and said: “Nightmare.”

Turner then looked at Roy Hobbs and raised his eyebrows before noticing for the first time that Hobbs has freckles.

Meanwhile corporate affairs manager Bill McKay made a self-consciously thoughtful face, which he had been practising until 3am the night before, and wondered whether he should suggest calling his neighbour’s brother-in-law Raymond, who is one of those people who can fix pretty much anything.

But despite being fairly confident that Raymond would have a decent crack at it, McKay decided to keep his mouth shut for the time being and instead offered around a packet of poor quality American sweets.

The situation is expected to continue until either someone comes up with something or they all go for a pizza. 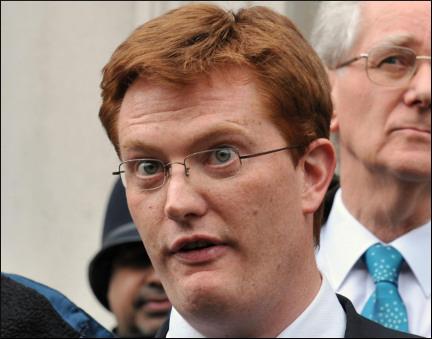 A FRESHLY terrified Britain was gaping into the abyss today as David Cameron handed control of the nation’s purse strings to a ginger.

Experts said that Danny Alexander, the new chief secretary to the Treasury, was so gingery the credit rating agencies would inevitably downgrade Britain as everyone knows that gingers cannot be trusted, especially with money.

Meanwhile the pound fell sharply in early trading as most Asian markets believe that Mr Alexander is possessed by a demon.

Julian Cook, chief economist at Donnelly-McPartlin, said: “If he was slightly auburn or even strawberry blonde that would be manageable, but he is slap-bang in the middle of the gingerosity spectrum.

“I think it would be best if we all just slowly and quietly back away from him and then move to Abu Dhabi.”

Professor Henry Brubaker, of the Institute for Studies, said: “Everyone in the Treasury must now be issued with an economy size box of latex gloves and someone will have to follow him around everywhere he goes and place a tea towel on the chair before he sits down.

“The tea towel will then have to be incinerated.”

He added: “He will also need his own bathroom, his own special pen and they’ll need to make sure his coffee mug has some sort of identifying mark on it. And they will, of course, have to install a state-of-the-art ginger sneeze alarm.”

Alexander was promoted after predecessor David Laws claimed Â£40,000 in rent in a bid to protect his secret relationship with all the money he made as a merchant banker.

But taxpayer Bill Mckay, from Grantham, said: “Can gingers even add up? I’m amazed they find the time between desecrating churches and having sex with cats. If this is the new politics then fuck it right in the ear.”

Helen Archer, from York, added: “I really didn’t mind that Mr Laws was a banker. They tend to be very neat.

“But this one’s going to take my money and do all kinds of horrible gingery things with it. And ask yourself this – do you really want the deficit to be cut if it’s just going to make everything smell weird?”