UNEMPLOYED people across Britain were celebrating today as the financial crisis which has wrecked their dreams gave Cherie Blair the chance to earn some enormous legal fees.

Mrs Blair, a leading QC, is acting on behalf of two local authority pension funds who had enough money to invest in the Royal Bank of Scotland while private pension funds were being systematically destroyed by her husband's government.

The former prime minister's wife told The Times she agreed to take the case because of the massive losses inflicted on local authorities and the gigantic fees they will be able to pay simply by putting up council tax.

She added: "It's also about my great big house in the country. It needs a new gazebo and one of those really wide American fridge freezers with an ice dispenser built into the door."

The case is expected to take several years to come to court giving Mrs Blair enough time to shop for even bigger houses and make another documentary about the need for increased Popery.

Bill McKay, a retired engineer whose private pension is now worth around eight pence a month, said: "Just the other day I was saying how worried I was about Cherie and whether she and Tony would be able to manage.

"She's the perfect choice given that she spent 10 years living next door to the bastard who caused all of this. Perhaps she could cross-examine Gordon Brown and then they could go for a nice lunch and a catch-up."

He added: "Of course she would have had even more specialist knowledge if her husband had been involved in running the country in some way but, understandably, he was too busy being Jesus." 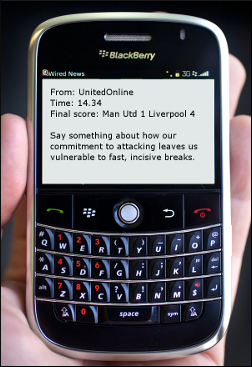 It is the first time the club has used its new £20 a month subscription service which also includes a selection of talking points, a football ‘word of the day’ and the names of key players from both teams.

Julian Cook, a season ticket holder from Primrose Hill, said: “How ghastly. Does that mean that Liverpool win the big cup? Or is it just the league thingy?

“As long as it wasn’t the big European whatsit because I’ve arranged to meet up with some friends in Barcelona next month and do a bit of shopping.”

As the final whistle blew on Saturday only three United fans remained in the ground after their wheelchair helpers gave up and headed to the car park.

Liverpoool manager Rafa Benitez said: “At first I think Ferguson do this deliberate as some kind of spooky mind game in latest pathetic attempt to drive me insane.

“But then I realise that United fans are very busy peoples with Blackberries who no have time to see their team lose.”