THE head of a massive company has earned more than your annual salary in just four days, although to be fair you don’t really work very hard.

CEO Julian Cook, who earns £4 million a year, certainly does not deserve such high pay but nor did you deserve what you got yesterday for eating leftover Celebrations and complaining about your hangover.

Office worker Francesca Johnson said: “Certainly the amount he gets compared to how much more he does is disproportionate, but I didn’t even turn my out-of-office off until this morning so I’m not in the strongest position to argue.

“He probably has to send emails at midnight and other tiring shit like that. He looks knackered and will probably keel over when he’s 54.”

She added: “Is it not the British dream to earn just about enough money for doing bugger all? Are we not each of us, in our own ways, living that same dream?”

Panto audience asked to believe in Brexit to save Tinkerbell 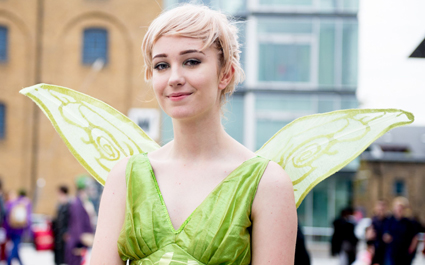 THE audience at a production of Peter Pan have been told they must believe in Brexit if Tinkerbell is to live.

Peter Pan, played by Hannah Spearritt of S-Club 7, exhorted the 1,000-strong audience to believe in Brexit as hard as they could or poor Tink could slip away.

She continued: “Come on, she needs you! Believe that we will be financially better off by making independent free trade deals with the Commonwealth!

“In the stalls, believe in the 400,000 jobs that will be created by leaving the customs union! Up there on the balcony, I need you to believe in taking back control of our borders!

“Please! Believe that Britain can be great again, or I’ll lose my best friend in all the world!”

Following the speech Tinkerbell revived and fluttered around the auditorium throwing handfuls of cheap, nasty sweets to the audience as a reward, not as a metaphor.