IMBECILES around the UK are preparing to be enchanted by an advert for a big shop.

John Lewis’s seasonal emotion-manipulator debuts on TV this Saturday. It is ostensibly about friendship despite its actual message of ‘purchase objects’.

Fucking idiot Tom Booker, who watched the ad on YouTube, said: “A hare and a bear are friends. I am a grown man but I like that concept because I am intensely stupid.

“I love these epic Christmas ads because my feeble mind can’t work out when to have an emotion.

“It’s a nice, warm thing to have my feelings expertly puppeteered by a large company.”

Moron Emma Bradford said: “Is the John Lewis ad a well-crafted but ultimately cynical festive tale that exists only to generate more profit?

“If so, I’m in. Cartoon animals and shopping are my top things in the world.

“Anyone who doesn’t like those things is just mean.”

Naturalist Roy Hobbs said: “In real life, if a bear got close enough to a hare it would bite it in half then yank out its steaming giblets. 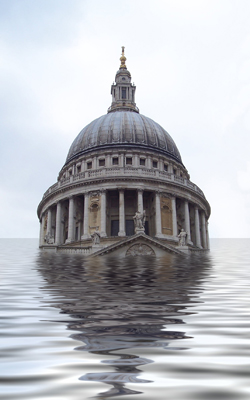 NEW projections that London will be reclaimed by the sea have been greeted enthusiastically by the rest of the country.

The provincial population is excited by the prospects of taking speedboat tours around a half-submerged Gherkin and everyone in Britains capital being eaten by eels.

Just seeing maps of Britain with London as a lovely big blue bay gives me a calm feeling of everything being in its right place at long last.

Climate change expert Dr Mary Fisher said: London is the home of 73 per cent of the UKs wealth and 93 per cent of its twats. Letting the city sink beneath the waves will be an enormous net gain for the rest of Britain.

Losing Hull and most of the East Midlands is just a bonus.

But the news that the flooding, even at the current rate of climate change, could take 5,000 years has been greeted with widespread disappointment.

Cook said: 5,000 years? I cant wait that long. If I leave the patio heater on, could we get it done by next Tuesday?