The shops – which are flourishing in the 90 per cent of the country classed as ‘deprived’ – allow customers to browse second-hand clothing, load up on liquid nicotine and lose £20 on a fixed-odds betting machine all in one place.

Hard-up vaper and gambler Stephen Malley said: “It’s bloody brilliant. I don’t know why nobody’s thought of it before.

“It’s such a bloody drag trailing in and out of three different shops when you could have one shop catering exclusively to the lowest common denominator, ie. me.

“Now I can have a chat at the counter about whether the new vanilla pod liquid’s better than strawberry mint, have a look if there’s any Jack Reacher books I’ve not read, and put a bet on Fancy Rodent in the 3.45 at Doncaster, all in one place.

“They haven’t quite got the staff right yet. I don’t need old ladies cooing ‘oh, how lovely’ when I put £10 on Kane to score first in the North London derby, but this is the best idea since supermarkets forced literally everyone else out of business.”

Are you an old-school hard-left tosser? 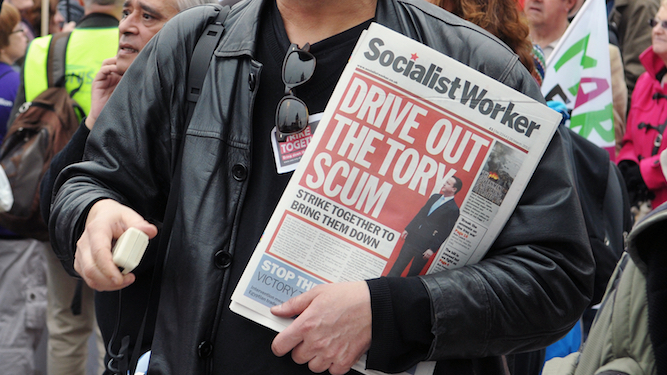 ARE you the sort of left-winger who’s stuck in a 1970s timewarp of revolutionary rhetoric and an obsession with Israel? Take our quiz and find out.

What concerns British people at the moment?

B) The Palestinians and Israel. Definitely not their nan sitting on a trolley for five hours in hospital.

What do you think of the sitcom Citizen Smith?

A) It’s a pretty funny portrayal of 1970s revolutionary types.

B) I am so humourless I believe it is an affecting drama about a brave comrade’s struggle against bourgeois indifference.

Who do you hate most in politics?

A) Cynical, self-serving individuals like Theresa May and Jacob Rees-Mogg.

B) My former friend Dave, who broke away from the SWP to join a splinter CPGP group, betraying his RCP comrades and…” [Continues for some time with an alphabet soup of obscure organisations.]

Do you attend local council meetings?

A) Yes, they should really be sorting out the potholes on Cumberland Avenue.

B) Yes, I am engaged in a clever entryist plot to take over the Lib Dems and put Knutsford under the control of a Revolutionary People’s Committee, led by me.

What is the best way to achieve a more left-wing government?

A) Not easy – but vote Labour or tactically, and pressure your MP.

B) Spend all your time on Twitter ranting about Zionism, which, even if you’re not anti-semitic, fucking sounds like it and can easily be read by arsehole Daily Telegraph reporters.

How do you relax of an evening?

A) Pizza, bottle of wine, Netflix.

Mostly As: You seem quite normal. Revolutionary politics is probably not for you.

Mostly Bs: You are an old-school leftie. Still, at least you can get some media attention while you’re waiting for that pesky revolution that never comes.