A DOG-OWNED analytics company has been selling information gained by sniffing other dogs’ arses, it has emerged.

Labrador-run Dog Analytics is thought to have shared information on as many as 50 million dogs’ arses with marketing companies, Russians and pro-Brexit groups.

Dog Tom Booker said: “I let that golden retriever sniff my anus in good faith, not knowing that corporations would use this information to manipulate my political views.

“A dog’s bottom is his own business and no one else’s. Unless another dog wants to come over for a sniff that is, in which case that’s perfectly fine.”

Hungover man discovers he can eat infinite amount of food 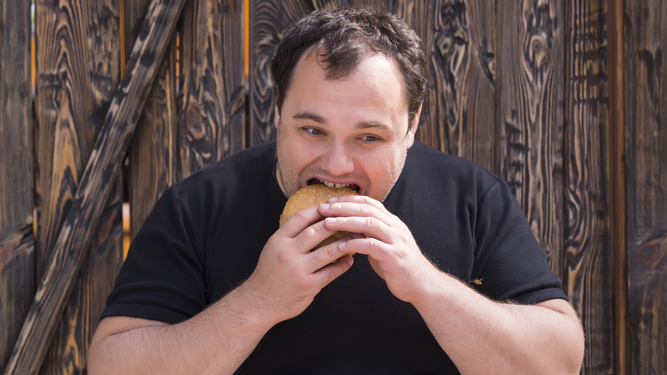 A MAN recovering from a hangover has discovered he can eat a superhuman amount of food without becoming full.

Tom Logan discovered his new ability while recovering from a horrific midweek hangover and discovering he had the appetite of a large bear.

Office worker Logan said: “After giving myself alcohol poisoning I felt the responsible thing to do was to eat a large fry-up to restore my body’s lost nutrients.

“However after gingerly gnawing through it I discovered I was still starving and consumed a bag of cashews, a ready meal and a tub of Haagen Daaz. Then I got a strong urge for pizza.

“As the 13.5” Domino’s Mighty Meaty with chicken wings slipped down effortlessly I realised I had a rare gift – being able to eat incessantly so long as I have a hangover.

“I reckon I could win those eating competitions they have in the States. On Sunday I could easily have eaten 100 hot dogs, so why not get paid for it? I’ve been thinking about a career change anyway.

“After some internet research I’ve worked out I can earn at least $225,000 a year, and all I have to do is get wankered the night before. Also, think what I’ll be saving on food bills.”

However Logan’s girlfriend Nikki Hollis said: “Tom does not have an amazing new superpower, unless Marvel is about to release Captain Sweaty, Borderline Alcoholic.”