BOTTLENOSE dolphins have been installed as executives by several high street banks, it has emerged.

Tom Logan, head of recruitment at Donnelly-Mcpartlin, said: “The dolphins know instinctively that lending several billion pounds to people with more CCJs than GCSEs is a bad idea and have never financed a single undersea drug cartel.

We had some teething problems with Boko, a 17-year-old male, whos demanded a signing-on bonus of 1.2 million hake to become Investment Manager at Clydesdale Bank.

Theres also been sexual harassment claims filed against another bottlenose we placed at HSBC but we think he was just using his prehensile penis to operate the coffee machine.

Overall though, theyve been a breath of fresh air around the workplace and even when theyre announcing that theyre making hundreds of people redundant, they have such adorable smiles that you dont mind.

The dolphin recruits have been given offices in the docks surrounding Canary Wharf and have communicated their complex fiscal decisions via a series of beach ball bounces and bicycle bulb horn honks.

Logan said: Once the markets are more secure and major decisions can be entrusted to humans again, the banks will simply employ Japanese fishing trawlers to execute a harpoon-based redundancy program. 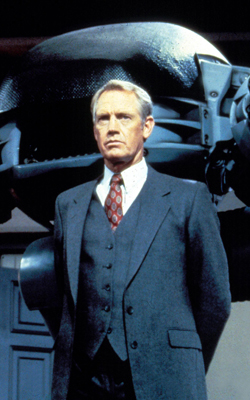 The bipedal robot, which boasts twin .50 caliber cannons and is programmed to detect any breaches of the law inside stadia, was unveiled at a board meeting in G4S skyscraper head office.

Rockstar-haired G4S boss Nick Buckles, standing proudly in front of the robot, said: We won’t have any problems with ED-209 being insufficiently trained, not turning up to work, or running to the fucking newspapers with a sob story about our chaotic recruitment process.

Anyone in the Olympic security zones carrying a weapon, behaving erratically or simply bearded will be given 20 seconds to comply with ED-209s instructions or face the consequences.

The robot will respond to terrorism with lethal force but can also use verbal warnings to deal with minor infractions of Olympic rules, such as eating at Burger King or paying with Mastercard.

Buckles said: Here, Ill demonstrate. Hey ED, Ive got a ticket to the 100m final but its got someone elses name on it. What you gonna do about it, huh?

You see, hes issued a warning to return the ticket so I drop it. Hey, whys he still counting down? Hes still aiming at me. Turn it off! Turn it off!

Following a bout of protracted gunfire, the smoke cleared to reveal the bullet-ridden corpse of the manificently-coiffed CEO, its face twisted into a mask of fear.

A G4S spokesman said: “The ED-209 has experienced a minor programming glitch, probably something to do with Windows. Thanks everyone.”

The beleaguered security firm is also exploring other methods of crowd control including untested biotechnological pacification units developed by its subsidiary, the Weyland Corporation.