THE UK economy has immediately grown by 12% after Prince Andrew agreed to leave it alone.

The royal whatever-he-is announced his retirement as trade envoy yesterday, which took 40 minutes longer than anticipated as he patiently explained what he had been doing in the first place.

Constitutional expert Denys Finch-Hatton said: “The Duke of Wentworth is in great demand by organisations across the globe, keen for him to announce he has no involvement with them. I know several landmine manufacturers are looking to use his lack of endorsement as part of an image makeover.

“A company can fill its order book in an afternoon if the clueless, freeloading numbnuts confirms he’s never even heard of them.”

His position became untenable after he confessed during a meeting with a group of industrialists that he did not actually know what a factory was but guessed that it was a kind of hat.

Since taking on the role 10 years ago, the government has estimated that the prince brought just £3,500 worth of business into the country, and that was an order for a pair of panda skin driving gloves that he had bought for himself.

It is understood the prince will now devote any available non-golf minutes to giving talks on business success to teenagers, which will consist mainly of advising them to be gestated in a womb of a Saxe-Coburg.

Finch-Hatton added: “Maybe he could start up a PR company with that billionaire nonce friend of his.”

MPs 'may have been misled' by arse-covering lounge lizard 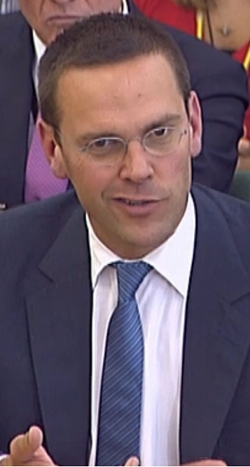 A PARLIAMENTARY committee may have been misled by an unctuous corporate sleaze-ball who was there for the sole reason of covering his sorry arse.

It has emerged that James Murdoch may actually have been aware of one thing about the company he runs and could now be forced to pay lawyers to come up with a skilfully modernised version of what he actually knew.

Murdoch approved a payment of £700,000 to Gordon Taylor after the News of the World hacked into Taylor’s voicemail and revealed he had been responsible for almost 20 years worth of English footballers.

But earlier this week Murdoch told the culture, media and sport committee that at the time he did not know the paper had also been hacking the phones of everyone else who was alive at the time.

But two former News International executives have now pointed out that Murdoch is someone who always been very keen to remain immensely rich and not in prison.

Former NotW editor, Colin Myler, said: “Like many people across the country I watched James Murdoch on the telly and thought, ‘that guy is obviously full of bullshit. How is he getting away wth this?’.

“The carefully rehearsed answers, the overstated contrition and, you know, his face and stuff.”

He added: “Oh yeah, and then last night I remembered that he also got this email a couple of years ago which – if he read it – means he knows everything.”