Energy Companies All Back Same Horse In 3.50 At Lingfield Obvious Cartel, a five-year old colt trained by Jenny Pitman, came out of nowhere to romp home at the head of the nine-horse field, coming in a full two lengths ahead of The Greedy Bastard.

Bookies’ favourite Laissez Faire, trained by Sir Mark Prescott and ridden by Adam Smith, had a dismal day out and came in a very poor last.

Wayne Hayes, from German power giant E.on Energy, said: “I didn’t even realise any of the other companies were at the races today. I must say hello to Trevor from Scottish and Southern.”

Npower’s Tom Logan said his company had originally intended to go to the evening meeting at Wolverhampton but switched to Lingfield at the last minute so they could all get home in time to catch the first part of Ashes to Ashes on BBC1.

He added: “We didn’t really know the field so we just got Julie from the office to pick one whose colours she liked.”

Henry Brubaker, from British Gas, said: “We don’t normally socialise with people from the industry and we definitely don’t swap tips when we do. Or talk about price fixing.”

A spokesman for the consumer group Energywatch said: “I think it's great they've all won a  few quid on the horses. If I ever win any money I'll have an operation so that my head will no longer ZIP UP THE FUCKING BACK.” 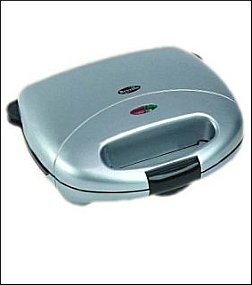 THE UN secretary general has written to the prime minister of Thailand asking why they don't just eat toasted sandwiches. The Breville TR46: not really set up for rats

Concern is growing in the international community after reports Thailand was drowning rats and then deep frying them as a mid-afternoon snack.

In his letter to the prime minister, UN chief Ban Ki-Moon said: "Honourable friend, are you experiencing shortages? Has there been a problem with the harvest? If so the United Nations stands ready to help the proud people of Thailand.

"But if not, then we're all really quite curious as to why you've taken to devouring deep-fried rats. Is there a new superfood I don't know about?

"I'm sure you've already thought of this, but here's an idea: Why not just make yourself a nice sandwich?

"Maybe some cheese or ham, a spoonful of chutney, a couple of bits of lettuce if you're feeling all healthy. I'll tell you what, my mouth's watering just thinking about it. Mmmmmm.

"And if you've got time – or if you're feeling a bit adventurous – you could even bung it in a toastie maker.

"It only takes a couple of minutes and it comes out piping hit and oozing cheese. Goodness me, what a treat."

He added: "I enclose a brochure for the Breville TR46, which is an excellent entry level machine and surprisingly easy to keep clean."