EVERY middle-class family believes Aldi is great for certain products but no two lists are the same, researchers have found.

The families each believe themselves shrewd for picking up select items at bargain prices, while disagreeing violently on which items to buy.

Julian Cook of Fareham said: “That’s the Johnsons over there. Saw them in M&S Food this morning. What on earth are they putting in their trolley?

“Cucumbers? Dear oh dear. Some people can’t tell wheat from chaff. Get another of those toilet rolls, they’re just as good as Andrex.”

Francesca Johnson replied: “Urrgh, they’re buying the bog roll. Remind me not to shake hands with him for a couple of months.

“Don’t they realise this place is only good for fresh stuff? Stick those chops in. Half what you’d pay at Sainsburys.”

Consumer expert Joanna Kramer said: “What these families of good incomes are buying from budget supermarkets are not goods, but the thrill of being crafty consumers pulling a fast one.

“None of them eats the stuff they’ve bought from Aldi, because it’s weird. 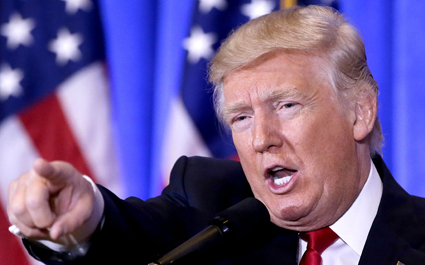 PRESIDENT Trump has revealed that the launch code to America’s nuclear arsenal is also his television catchphrase.

The President disclosed the details during a closed-door meeting with Russia’s Sergey Lavrov, in which he allowed the minister to have a rummage through the nuclear briefcase.

Trump said: “I said to him, ‘This is the code. ‘UR-FIRED’. It’s based on a show I did, but I don’t think he understood that.

“They don’t show The Apprentice in Russia since ratings dipped. Their loss.

“However I came up with the idea of shortening ‘You’re’ to ‘UR’. I guess it just came to me.

“I told him, this is the code, and I’m the only person who knows it because I’m president. How about that?”

He added: “In the show I say that when I am firing people, but ‘firing’ is also what you do with missiles. Double meaning.

“My friend Vladimir likes jokes like that. When he finds something funny he laughs and it sounds like dead leaves rustling in a sack.”