Everything We Sell Is A Cake, Claims M&S

MARKS and Spencer has launched a legal challenge against the Inland Revenue, claiming that every one of its 25,000 products is a cake.

As the European Court of Justice awarded M&S a £3.5 million VAT refund on its teacakes, the store revealed that its skirts, blouses and underwear are actually different varieties of attractively shaped cloth cake.

It also insisted its popular lambswool sweaters are crewneck winter cosy cakes, while its cold roast chicken is, and has always been, free-range poultry cake with invisible fondant icing.

M&S chief executive, Sir Stuart Rose, said: "It's all cake. Lovely, lovely cake. Would you like a slice of patio furniture?"

In the wake of the M&S teacake battle, the European Union has pledged to enforce a maximum height for biscuits.

Anything higher than 20mm will be classed automatically as either a cake, a tart or a 'fancy'.

Meanwhile the Austrian government is preparing a multi-million pound law suit to establish a separate classification for the cream horn.

Wayne Hayes, an M&S shopper in Bristol, said: "A teacake's a biscuit, and so's a fuckin' Jaffa Cake, alright?"

BBC Shut Down After Programme About Big, Fat Cocks 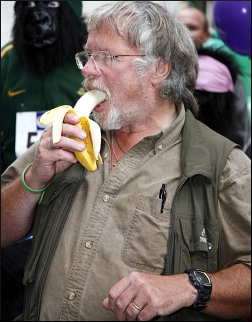 THE BBC has been shut down temporarily after complaints about a documentary featuring dozens of big, fat cocks.

In her letter to the regulator Mrs Turner said the use of the word 'cock' was made all the more offensive given that it was preceded by the words 'big' and 'fat'.

She added that as the programme was broadcast at 5.30pm, children could have been exposed to images of cocks and cock-related language.

Upholding the complaint, Ofcom ruled that the BBC would be closed down for one week so it could think about what it did.

The Corporation has accepted the ruling but stressed the programme was simply a well-researched history of the domestic chicken, written and presented by Britain's favourite bird-watcher.

A spokesman added: "We accept we should not have broadcast a programme about chickens before the watershed.

"It is absolutely right that one complaint from a nutjob should cause everyone who works in the media to piss their knickers."