SIR Fred Goodwin was understood to have lost his mind last night after deciding to give up half his pension and leave his luxury villa in the South of France.

As the former Royal Bank of Scotland chief executive made the offer to smooth his return to the UK, people across the country said if it was them they would be learning French and browsing through yacht catalogues while an attractive man or woman licked paté off their private area.

Wayne Hayes, from Hatfield, said: "He's giving up the pension so that he can leave the French Riviera and come back to Scotland? I'm sorry, I must have misheard you, can you say it again more slowly?"

Margaret Gerving from Guildford, added: "Surrender half the pension you are legally entitled to so you can come back to some shithole of a country where it rains all the time and everyone thinks you're Satan… I'm beginning to understand why RBS went down the tubes. He's a psychopath."

She added: "Is he really that worried about people in Britain hating him? They hate whoever happens to be on the front page of their idiot newspaper. Half of them hate Susan Boyle and they don't even know why."

Tom Logan, from Porter, Pinkney and Turner, said: "If the criteria for giving back half your pension is being shit at your job, then can we have back half the pensions of all those teachers whose schools have been churning out thumbless fuckwits for the last 20 years?

"The long term cost of that is going to make the bank bail-out look like a smaller amount of money because it will be."

MPs Censor Expenses In Bid To Make You Forget 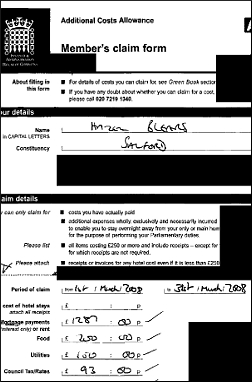 MPs have published a censored version of their expenses in the hope that you will forget you have already seen them.

Leader of the Commons Harriet Harman said the documents had to be blacked-out otherwise members of the public would be able to find out the actual addresses of all the houses they already know they paid to do-up.

Ms Harman added: "I read somewhere that if you show someone a document, ask them to memorise it and then take it away, cover it in black ink and show it to them again, they will immediately forget everything they read in the first place."

Constituents of Tory MP Douglas Hogg said that unless they were able to see his address they would have no way of finding out which gigantic house with the pristine moat was his.

Meanwhile people in Sir Anthony Steen's Totnes constituency said the only clue they had to help them find his house was that it was very, very large and some people said it looked like Balmoral.

Experts stressed that by publishing a censored version of the expenses the MPs had somehow managed to achieve the impossible and made the whole thing even worse.

Dr Martin Bishop, of Reading University, said: "Not only are they saying they had every right  to defraud you, they are also saying you have absolutely no right to know anything about it. And just as everyone was starting to read about celebrities again."

Bill McKay, who spent much of last month building a set of gallows outside the Palace of Westminster, said he had 'gone to a lot of bother only for everyone to get bored with it all of sudden'.

He added: "And now this happens, which means I'll have to re-oil the hinges in the trap door and find some fresh rope. It's a pain in the arse is what it is."