Friends Reunited to do one of the things that Facebook does

FRIENDS Reunited has relaunched with a pledge to be not bad at one of the things that has made Facebook enormous.

The steam-powered social network is to make a comeback by helping people share photographs and sentences that will help them remember things.

A spokesman said: “It’s all about nostalgia. In the same way that Facebook connects people who knew each other years ago and allows them to talk about their shared past, so will we, except we will keep saying the word ‘nostalgia’ until it loses all meaning.”

“Like all nostalgia it will be at once vaguely comforting and acutely embarrassing.”

He added: “Their slogan should be ‘Using Friends Reunited – Like watching an episode of Howard’s Way‘.”

Meanwhile the website has teamed up with Premier Inn to offer a £50 a night Fuck-Your-Teenage-Sweetheart special offer.

The package includes a big bottle of cider, a DVD of The Lost Boys and a guaranteed morning-after feeling of total emptiness.

Hoddle to be reincarnated as England manager 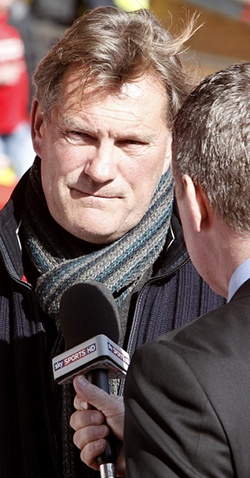 GLENN Hoddle is planning to end his own life, ride the wheel of karma and return to this world as the manager of the England football team.

Hoddle believes the virtuous way he has spent his time on this earth means he will get his pick of next lives and ‘won’t return as a lower species like a dog, an invertebrate, or a woman’.

Hoddle, who was actually quite good at managing England, will set himself on fire in the centre circle of Wembley during the FA Cup semi-final half-time show.

He said: “Everyone should enjoy the show because they’re not seeing a human being die in agony but an immortal soul returning to the ‘bardo’ or ‘intermediate state’.

“I may come back as a Vietnamese boy with an ethereal glow and a uncanny gift for orchestrating set-pieces, or perhaps I’ll be a pillar of blue fire pacing the dugout and shouting at Gerrard to spread it wide.

“Once I have taken England to the final of a major international I will achieve nirvana and transcend the wheel of life. Obviously even the Buddha himself can’t expect me to win the thing, not with that team.”

Experts said the the cycle of England managers is itself an object lesson in Buddhism, as the FA fail to learn from their past managerial appointments and eternally repeat their mistakes and their suffering.

Hoddle’s bid has been challenged by the late Brian Clough, who plans to manage the team from the third circle of hell, reserved for gluttons.