The bipedal robot, which boasts twin .50 caliber cannons and is programmed to detect any breaches of the law inside stadia, was unveiled at a board meeting in G4S skyscraper head office.

Rockstar-haired G4S boss Nick Buckles, standing proudly in front of the robot, said: We won’t have any problems with ED-209 being insufficiently trained, not turning up to work, or running to the fucking newspapers with a sob story about our chaotic recruitment process.

Anyone in the Olympic security zones carrying a weapon, behaving erratically or simply bearded will be given 20 seconds to comply with ED-209s instructions or face the consequences.

The robot will respond to terrorism with lethal force but can also use verbal warnings to deal with minor infractions of Olympic rules, such as eating at Burger King or paying with Mastercard.

Buckles said: Here, Ill demonstrate. Hey ED, Ive got a ticket to the 100m final but its got someone elses name on it. What you gonna do about it, huh?

You see, hes issued a warning to return the ticket so I drop it. Hey, whys he still counting down? Hes still aiming at me. Turn it off! Turn it off!

Following a bout of protracted gunfire, the smoke cleared to reveal the bullet-ridden corpse of the manificently-coiffed CEO, its face twisted into a mask of fear.

A G4S spokesman said: “The ED-209 has experienced a minor programming glitch, probably something to do with Windows. Thanks everyone.”

The beleaguered security firm is also exploring other methods of crowd control including untested biotechnological pacification units developed by its subsidiary, the Weyland Corporation.

A brief history of the Olympics 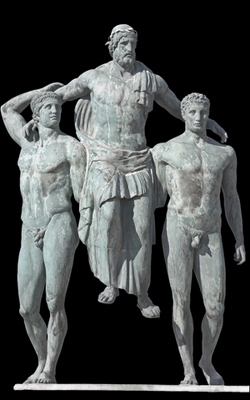 The Daily Mash presents the story of the Olympics, from its roots in the classical era to becoming a modern-day massive balls up.

The Olympic games were founded in 191 BCE by the Roman pervert emperor Onanus. Held in Onanus’s private frottage garden, naked athletes participated in sex-themed events like the 300m Phallus Relay while the bloated emperor looked on salaciously, lying on a day bed and eating live fish out of a jar like Jabba the Hutt.

The first ever Olympic sponsor, Slaves Direct – which styled itself as the number one mail order slave company – came aboard 12 years later after Onanus fell into heavy debt with his catamite vendor. Slaves Direct paid for the first games arena and introduced non-sexual events such as horse boxing. Specially trained horses would fight dishonoured soldiers, invariably killing them. Pugilus the Olympic battle stallion was eventually honoured with a solid gold nosebag.

The Olympics didn’t happen again for several centuries. There were a few meetings about it but no real enthusiasm.

In 1906 the Olympics was revived in the Welsh region of Barry Island. Stephen Malley, a dairy farmer with a history of psychiatric problems, decided to recreate the event in his porch using beetles as participants and worms as apparatus. Shortly afterwards he was permanently incarcerated but the legend of ‘crazy Steve’s Olympic porch’ was perpetuated by local gossips, and at some point the words ‘porch’ and ‘torch’ became confused.

Hitler held an Olympics in 1936, ostensibly to celebrate the glory of the Reich, although personal documents indicate he just wanted to see the black athlete Jesse Owens in tight shorts.

In 2012, Texan smallholder Lord Sebastian Coe decided to bring the Olympics to London after a series of hallucinatory visions culminated with a poorly-drawn 2012 logo appearing in his field of wheat. Lord Coe immediately left for England with his wife JoBeth and eldest son Cleetus, where he raised the necessary funds through a mixture of sponsorship and selling home-made whiskey. Coe believes that the 2012 games will culminate in the arrival of a spacecraft that will kill everyone he doesn’t like with a heat ray before whisking him off to the planet Altair to live in a luxury bungalow. Watch the skies.