Government to build runways everywhere and let the market decide

THERESA May has announced plans to carpet Britain with runways and let the market decide.

May ended speculation about airport expansion by endorsing new runways at Heathrow, the Thames Estuary, Stonehenge and three and a half thousand other locations across the UK.

She said: “If anywhere in Britain is more than ten miles from an airport, that is an unacceptable restriction on the free movement of planes.

“If Ryanair wants access to Kensington High Street, or the New Forest, or the top of Mount Snowdon, the government should be helping, not interfering.”

The prime minister also laid out plans for a helipad on top of every building higher than four storeys, and a jetpack-recharging point at every petrol station across the land.

She continued: “With thousands of safe, convenient runways all over the country, families will find it easy to start their own airlines should they wish.”

May added that several thousand additional border guards would be deployed to stop anyone trying to get into Britain illegally or, as is looking increasingly likely, trying to emigrate. 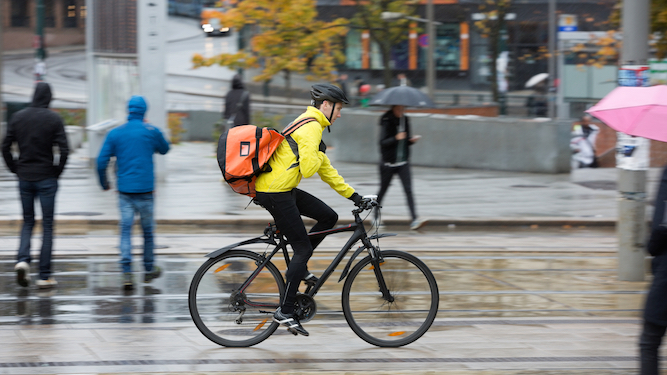 A SELF-EMPLOYED man would love to be trapped in a soul-destroying salaried job, he has confirmed.

Martin Bishop feels his life would be vastly improved if he swapped his one-man bicycle courier business for a dead-end, repetitive role with an uncaring employer.

Bishop said: “Working 16 hours a day in a state of constant panic, for less than the minimum wage, has motivated me to break free from being my own boss.

“I think what appeals about the employed lifestyle is having enough money to buy food.”

He added: “I thought working from home would let me have baths in the day and watch Bargain Hunt for a break, but that doesn’t happen when you’re doing longer hours than someone in a gulag.”

Bishop is now waiting to hear about a minimum wage job cleaning machinery in a dog food factory, but is trying not to think about it in case he jinxes it.