STOCKBROKERS are preparing for a third day of running around and waving their hands in the air, shouting 'nooooooooooooooooooo!!!'.

In London, the FTSE 100 ate all its clothes and crashed its Aston Martin into the Bank of England before running around the Monument shouting 'nooooooooooooo!!!'.

In Frankfurt the Dax opened its bowels into the waste paper basket and then smeared “I hate shares” in excrement on the walls before running out into the street shouting 'neeeeeeeeeeeiiiiiiiin!!!'.

The CAC in Paris had its worst day since it threw up on its new suit after a bad snail, while in New York the Dow Jones took an assault rifle to work and posted a video on YouTube.

Evan Davies, the BBC's economics editor, said: “The world’s stock markets are like a finely tuned barrel of eels.

“As they plunge, sea levels rise, leading to a fall in the price of dogs. Even if cat prices remain stable a recession then occurs. No one knows why.”

Davies added: “People often ask me why they have to lose their job and their home because a man in an expensive shirt made some terrible decisions. I tell them no-one knows.”

Alastair Darling, the Chancellor of the Exchequer, woke up in his own shit. 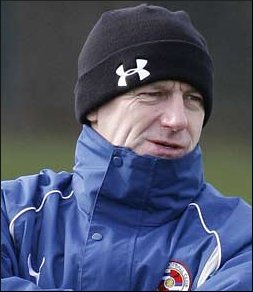 SIR ALEX Ferguson has apologised for upsetting Reading supporters at the weekend, saying he did not realise they were having their period.

The Manchester United manager admitted his offensive gesture at the Madejski Stadium was excessive given the delicate hormonal balance of the opposing fans.

"Football can be a tough old game," said Ferguson. "Especially if you're just some wee lassie with the painters in, who bursts into hysterics if you put sugar in her tea."

Wayne Hayes, spokesman for the Reading FC Supporters Association, said: "We were all feeling very upset and vulnerable after Ronaldo's goal.

Hayes added: "My friend Wesley is facing a particularly difficult week at work and this was the last thing he needed."

Ferguson admitted to being 'insensitive' adding: "I didn't realise how emotionally fragile they would be, especially after the previous night's episode of Grey's Anatomy.

"The next time we play Reading I'll bring along plenty of chocolate and tampons for everybody."