Jobless Now Just Eight Years Away From Next Job

THE number of years Britain's unemployed will have to wait for their next job has been slashed from nine to eight, after an unexpected surge in business confidence.

The Institute of Chartered Accountants is predicting the economy will grow by 0.5% in the next quarter amid an increase in wishful thinking and jolly well putting a brave face on things.

A spokesman said: "Imagine planting a seed in the ground which then immediately grows downwards for about eight inches before changing its mind and growing upwards for about five inches.

"It's definitely an improvement, but you're still not going to get much in the way of courgettes."

He added: "Of course, as accountants we tend to be reasonably confident of being comfortably well off. Whether it's helping profitable companies reduce their tax bill, or helping unprofitable companies ease their way gently into receivership. It's always a nice looking graph."

Bill McKay, an unemployed sales representative from Doncaster, said: "What a relief. I was just thinking the other day that living in, sleeping on and eating cardboard could get somewhat tiresome after eight years."

Margaret Gerving, a former gift shop owner from Hatfield, added: "How marvellous. That should give me just enough time to write my novel and wean myself off my new and seemingly unquenchable desire for crystal meth."

The Treasury welcomed the report insisting that if the 0.5% growth rate can be maintained, Britain should be able to clear its £1 trillion worth of debt around the time mobile phones are replaced by telepathy and everyone can shoot laser beams from their eyes. 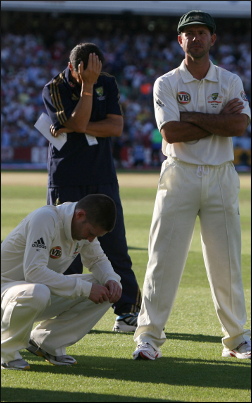 A THRILLING summer of terrible cricket reached its climax yesterday as England regained the Ashes by being marginally less dreadful than Australia.

Andrew Strauss's men stormed to a resounding victory at the Oval, with many claiming the England squad could now take its place in cricketing history as one of the best awful teams ever assembled.

The Queen led the tributes saying: "Your victory continues the proud tradition of British sportsmen being not quite as catastrophically bad at something as someone else.

"You have all played very poorly for much of the summer but showed great strength and fortitude by standing around and watching Australia being even worse.

"And, let's be honest, who would have guessed that? Not me, for starters. I owe the Duke of York eighty quid and he's a bloody golfer."

Delighted England captain, Andrew Strauss, said: "I always knew we would win the series as long as we matched Australia on a collapse-for-collapse basis.

"So you see, everything went exactly as I planned it. Yes it did. Shut up."

And man of the match, Stuart Broad, added: "I'm really looking forward to coping with the comprehensively insane level of expectation you all now have. Nevertheless, I hope to continue my form as long as no-one sees me sneaking onto the pitch in the middle of the night with a garden fork and a bag of gravel."

Meanwhile all-rounder Andrew Flintoff is currently on his way to Sao Paolo after accidentally staggering onto a freighter at four o'clock this morning dressed as a Vietnamese prostitute and swigging peach schnapps and lighter fluid from a policeman's helmet with a little umbrella in it.

Tom Logan, deputy editor of Wisden, said Flintoff should now be in line for a knighthood, adding: "They've been handing them out to any fucker that can row a boat, so I don't see why Freddie shouldn't get one for staying sober enough to strap his pads on all by himself."

Spokesmen for the Indian, South African and Sri Lankan cricket boards paid tribute to England and said they were eagerly anticipating an early opportunity to make them look like idiot schoolboys.