Labour Bottles The Taste Of Failure

THE Labour Party has combined the essence of disappointment, inertia and broken promises in a unique sauce that voters can add to their food.

While the exact formula remains a closely-guarded secret, the grey paste known as Failure is believed to contain Alistair Campbell's acrid tears, Peter Mandelson's pesto breath and the oily scrapings from the inside of Jack Straw's shirt collar.

A party spokesman said: "Failure is what's known as the 'fifth' taste after sweet, salty, bitter and Sunny Delight.

"It has a very unique flavour. Imagine if you were walking through Hackney on a rainy Tuesday and you saw a dead cat on the pavement, slightly rotten and with drenched, matted fur.

"Then you decided to stick your tongue in its ear, to see what its brain would taste like, and as you did so, a bus hit you and your face imploded."

The spokesman added: "It's particularly nice with some oblong mashed turkey product or refried pork tubes."

Labour is marketing the product as 'Reggae Reggae Sauce that's been through you once' and believe it will prove popular with Goths and those seeking an antidote to enjoyment.

Housewife Emma Bradford gave some to her 12 year-old son: "After three mouthfuls he dropped his fork, put his head in his hands and started mumbling 'mummy, it's all fucked' in a gravelly Scottish voice, before running upstairs and hiding under his bed for a fortnight.

"I then gave the leftovers to the dog but it immediately tried to drown itself in the toilet."

She added: "It's different but I probably wouldn't buy it again." 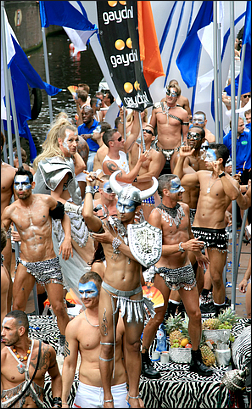 THE Archbishop of Canterbury has underlined the Church of England's support for tolerance and diversity with plans for a 'supergay' parade float.

Dr Rowan Williams said the Church would take part in this year's Gay Pride march in London for the first time and is thinking lots of feathers, a pirate theme or maybe even a great big chocolate cottage.

Dr Williams said: "I've spoken to Gok and he loves the idea of me in an eye patch with a large pink parrot on my shoulder.

"He said to me 'Rowan, three words – suede, pantaloons, fabulous' and I completely agree."

Other ideas for the Anglican float include a dance routine featuring the Bishop of Durham as a peacock-feathered Virgin Mary miming to I'm Every Woman as well as a pirate-themed, jazz-tap version of Christ's resurrection to the tune of I Will Survive.

Diocese across the country are now running a competition to find 12 oiled-up, bare-chested vicars who will walk alongside the float wearing nothing but a dog-collar and their unshakeable faith.

Bill McKay, a Carlisle parishioner, said: "Our vicar has been growing an enormous handlebar moustache, replacing hymns with Wizard of Oz singalongs and peppering his sermons with references to Pierce Brosnan.