Dear Holly,
The other day, my girlfriend was trying on an outfit and she asked my opinion. I said that she looked nice, at which point she got all uppity and said she didn't believe me and she wished that I would just be honest with her for once. So I told her the truth: that she looked like Les Dawson in a boob tube. Next thing I know she's dumped me. I really do not understand women – what am I doing wrong?
Dirk,
Swindon

Dear Dirk,
I wouldn't worry too much. There are lots of things I don't understand either. For example, I once overheard my sister and her best friend, Stacey Morris, in my sister's bedroom talking about 'blow jobs'. Having not come across this mysterious expression before, I asked my sister to explain further. Unfortunately, in doing so, I gave away my secret position in her wardrobe and thus became the target for a swift and violent attack, resulting in my immediate ejection from her bedroom with two dead arms and a sore bottom.
At Brownies that evening, I asked Brown Owl, as she is very wise, if a blow job could count towards my Hobbies badge. Unfortunately, whatever it means, it must be against Brownie-Guide law, because Brown Owl said I wasn't welcome at the Brownies anymore and when my mummy came to pick me up she was all shouty and red in the face. I had to go to bed with no supper that night, and for some reason my sister isn't allowed to be friends with Stacey Morris anymore. And despite all that fuss I'm still none the wiser. Thankfully, my granny is coming over for Sunday lunch this week so I'll ask her while she's having her prawn cocktail.
Hope that helps!
Holly 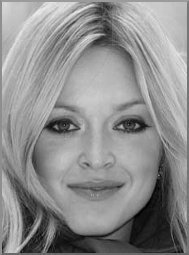 OH-my-God, I'm like, sooooooo busy at the moment – I haven't had any time to be down in the dumps, unlike the crowd of people I saw today standing at a bus stop in the rain. I told my driver to slow down and as he did, I poked my head out of the window and hollered, "Cheer up guys – it might never happen!" It doesn't matter how mega-stressed you're feeling, you've still got to find time for your fans.

The last couple of months have been a total nightmare as I've been rushed off my feet finishing my brand new TV series Fearne Meets dot dot dot. Last week, I was completing the episode, Fearne Meets dot dot dot Paris Hilton. Paris (which is short for 'Parasol' according to Keith, our sound man) has to be one of the most misunderstood people in the media today. To put the record straight, she isn't just another blonde bimbo airhead without any discernible talent – this is something I had to point out to a member of our crew who'd just used those exact words about her following take 47 outside the gates to her big house thingy place.

The first show in the series was Fearne Meets dot dot dot Joan Rivers. Now I must put my hand up and admit that I didn't actually know who 'Joan Rivers' was, until I got the brief telling me that she's a comedian. Which was really, really cool because I'm totally loving the comedy: Gavin & Corden, Alan Partridge (who's greatest creation has to be that strange little weirdo 'Steve Coogan') and my all-time favourite In The Office With Ricky Gervais, which as everyone knows is an absolute scream.

Juggling a career in TV and radio can be really, really tough at times. Sometimes I do forget but then the producer will whisper into my headphones that I can stop grinning and waving. But when it comes down to it, my first love is telly. If I had a job like photocopying things and stuff, or a career where I had to use my own money to pay for taxis, I wouldn't get to meet people like the great rugby player thingy Sir Winston Mandela. We were filming a special Fearne Meets dot dot dot a few months back, and I can only say it has to be the highlight of my career so far – with the possible exception of Peter Crouch, who was totally lush and really tall.

Anyway, I remember asking Sir Mandela why he had been put in prison – had the South American government caught him stealing something which didn't belong to him, or had they just been really, really mean to him? But before the great sir could reply, he was whisked off by one of his grumpy-looking PAs.  Oh well, 'say lavy' (which our sound man Keith tells me is French for 'life is like a toilet'.)