THE only healthy person on his office floor is considering faking a chesty cough to fit in better.

Adjuster Stephen Malley is the sole person in his department not to have managed to catch even a cold during January, and is finding himself cut out of conversations.

He said: “Everyone’s snotty, everyone’s hawking phlegm, and they communicate in loud hacking coughs that resonate around the office like mating calls.

“They’re all in the kitchen comparing symptoms and boasting about how little sleep they got last night, but the minute I walk in it’s silent apart from the sniffles.

“I’ve tried faking but they’re such connoisseurs they can tell there’s no rattle from six desks away. All I can do is keep drinking from other people’s mugs and hope for the best.”

But account manager Julian Cook said: “A cold? He thinks that’s going to get him into our Beechams Bunch WhatsApp group?

“I’ve now got severe pneumonia, which means I’m pretty much a VIP in the office, and that I may die.”

‘The crowd definitely reached all the way to the Washington Monument,’ Trump tells May 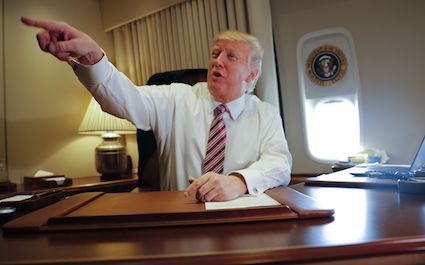 PRESIDENT Trump has spent his full hour with the prime minister discussing the crucial issue of underestimated crowd sizes at his inauguration last week.

Dismissing Theresa May’s attempts to bring up trade deals, NATO and China, Trump has insisted they go over the photographs once again until she understands exactly how big the event was.

He continued: “What the media did, what they did Theresa, was they edited the photographs. They can do that now with the cyber. They digitally removed the crowd.

“On this photo, taken from where I was, you can see the real crowd size. Huge, the biggest inauguration ever in history, period. Millions. No empty seats. None.

“I’d like us to come out of this summit and declare that together to the media. Present a united front because isn’t that what the Special Relationship means? Okay?”

Trump added: “Agreed? Okay, great. Fantastic. Okay, well now we’ve got that out of the way, let’s move on to the TV ratings.”