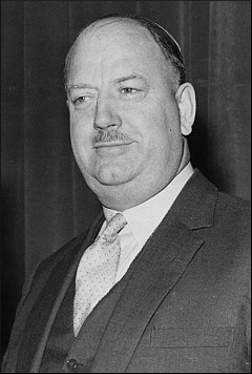 TRAIN operators are calling for hundreds of miles of disused line to be reopened, insisting no-one should be be allowed to evade the abject misery of local rail travel.

The rail companies want a widespread expansion of the network, with 14 extra lines, 40 new stations and enough Scotsmen to fill them all with urine.

In his ground-breaking 1961 report, Dr Richard Beeching described British trains as 'slow, unreliable, bumpy things, filled with the unmistakeable stench of the Glaswegian'.

He famously added: "I'd rather be fired backwards from a cannon in my wife's underpants than board the 8.04 from Cranleigh to Redhill. Buy a car."

Meanwhile angry commuters said they would still prefer to spend six hours a day swearing loudly on a bypass than use any form of transport available to the general public.

Tom Logan, from Brixham in Devon, said: "Trains are for people with no self-respect, while buses seem to be used exclusively by unemployed foreigners and pensioners who need somewhere to change their toilet bags on the way home from buying their weekly supply of tinned soup.

He added: "You can make the trains really fast, reliable and, if the science is possible, urine-free, but they will still be crammed full of other human beings that I want to kill."