A NEW food line aimed at greedy bastards is now on sale at Morrisons.

The Greedy Bastard range includes a yard-long sausage roll containing the meat of an entire pig.

Shoppers can also pick up a five-metre meat pasty for just half the price of a small lettuce, and a bucket of own-brand cola for the cost of half an apple.

A Morrisons spokesperson, said: “We believe in giving our customers what they want and what they want is massive fucking portions of things covered in pastry.”

Customer Tony Booker said: “Instead of having to buy three or four sausages rolls at a time, now I only need to buy one, or perhaps two.

“It is actually a much healthier option because it stops me snacking between meals. I have been gnawing one massive sausage for three days and have had no snacks whatsoever.”

'Sick' athletes must compete unless they have note from mum 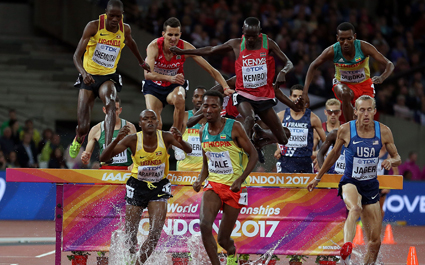 WORLD Championship athletes claiming to be poorly with a tummy bug must have a note signed by a parent, officials have confirmed.

Competitors in the World Athletics Championships are claiming to have ‘a 24 hour bug thing’ and have offered handwritten sicknotes which are being carefully scrutinised by organisers.

World Championships official Martin Bishop said: “Running round and round is boring and tiring, we know this. Athletes will try anything to get out of taking part, especially if it’s raining.

“Some claim they’ve forgotten their kit, but this is risky because they know we’ll probably make them wear the smelly shorts and dirty vest from the lost property box or, failing that, do it in their pants.

“Unfortunately there’s nothing we can do about genuine notes written by soppy mums who will crumble at the first hint of tears and write down a load of lies to get their kids out of it.”