M&S not sure if it is a shop anymore

MARKS & Spencer is unsure whether it is a supermarket or a quasi-spiritual organisation offering the promise of a better life.

The stores latest advertising campaign, featuring inspirational women such as Dame Helen Mirren and Katie Piper, has confused shoppers who just popped in for some balsamic vinegar and a quiche.

Housewife Donna Sheridan said: I like Helen Mirren, but its not clear what shes got to do with buying a ready-to-roast pork loin.

First they had the adverts with perfect food in perfect surroundings, like youd been invited to a finger buffet in Heaven and God had made a special effort.

Then there were the adverts with perfect families enjoying endless idyllic summer days, which didnt bear much relation to my own family holiday consisting of two weeks of arguing somewhere damp.

Now theyre going on about high-achievers like Monica Ali, which can make you feel a bit inadequate if youve never written a best-selling novel and youre buying a pair of elasticated slacks.

An M&S spokesman said: All advertising has an aspirational element to it, although we wouldnt advise our customers to try and be a top ballerina like Darcy Bussell because thats unbelievably difficult.

Its better if they just aspire to buying nicer fishfingers than the ones from Tesco. 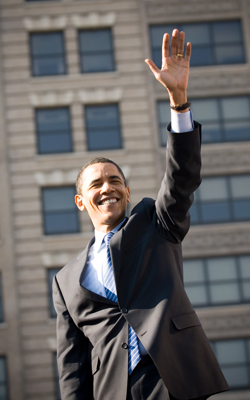 A GUARDIAN reader who has worshipped Barack Obama for five years without interruption has finally admitted he is just awful.

Martin Bishop, who until last week was still insisting Obama was a mixture of Martin Luther King and John F Kennedy, has now realised that America’s first black president is basically just that.

Bishop said: “I read in the Guardian this morning that he’s now saying there would be no attack on Syria if Assad gives up his chemical weapons. I just thought – ‘he’s an arse’.

“I’m not in favour of attacking Syria but couldn’t he have said that right at the start? So, yes, I admit it – he is a terrible president.”

Bishop said that even Obama’s achievements were ‘pretty thin’, adding: “The economy is recovering because they are printing shitloads of money. Any moron could do that.

“Well done for getting elected the first time – that was impressive – but the second time he was up against a Mormon. I mean, for fuck’s sake.”

Bishop then listed Guantanamo, Bradley Manning and the NSA as other reasons why he should have realised that Obama was ‘basically a twat’.

He added: “Anyway, I’ve learned my lesson. No more adolescent, liberal hero-worshipping for me.

“That said, I do think George Clooney would make a fantastic president.”