BRITONS face a race against time to spend their old £5 notes while they are still legal tender.

The nation’s cash-hoarders only have until next Friday to exchange their dirty old fivers for material goods before they become completely worthless.

Tom Logan of Mansfield said: “I’ve only got 168 hours to spend five whole pounds. Will I make it? What will I spend it on?

“Will I desperately fill a basket with Freddos? Will I blow it all on a really fancy sandwich? Will I panic-buy 100 carrier bags? It’s like Brewster’s Millions.

“The adrenaline is coursing through my veins. It’s a race against time and I have to win. This must be what it feels like to be an action hero.”

Experts are warning the public to expect a desperate game of pass-the-parcel on May 5th as everyone attempts to pass old £5 notes off on each other.

Financial analyst Bill McKay said: “If anyone tries to give you a fiver next Friday I’d advise you to punch out or go limp. If you’re holding a £5 note on the stroke of midnight, you lose.”

Ghost of Blair ordered back to the netherworld 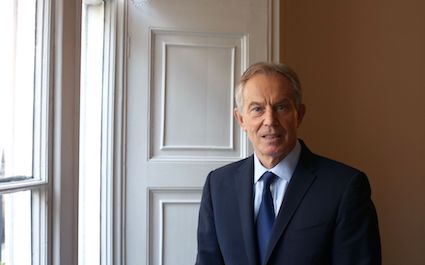 THE Archbishop of Canterbury is to exorcise the unquiet spirit of Tony Blair that is haunting the election, he has announced.

The apparition of the former prime minister continues to appear across the media and even in voters’ homes, exhorting them to return to the centre-right so he may rest.

Archbishop Justin Welby said: “We have been troubled by this spectre for long enough.

“He demands we rediscover his legendary ‘Third Way’ so he can depart this plane forever, but frankly none of us really knew what that was in the first place and it’s too much trouble so we’re doing an exorcism.

“Once we’ve lit the candles and said the Latin his wraith will be torn from our world into oblivion, with only a final cry of ‘I won’t apologise for deposing Saddammmmm’ left echoing in our ears.

“Hopefully it’ll be a lesson to other ex-PMs to shut up and stay dead.”

Gordon Brown said: “After I lost the election, I went straight to Hades and have remained here.