FORMER chancellor George Osborne has taken a seventh job serving behind the counter of Greggs in Romford, it has emerged.

Following news that Osborne, already employed as an MP, motivational speaker, Northern Powerhouse chairman, advisor, and Evening Standard editor had taken a position at the University of Manchester, Romford residents alerted the media to his seventh position.

Market trader Donna Sheridan said: “I knew I knew him from somewhere. It was the hairnet that threw me off.

“He’s there three days a week, dishing out the steak bakes, trying to up-sell meal deals and sullenly asking if you’ve got a rewards card. Doesn’t exactly stand out as a great employee, which in retrospect should have tipped me off.

“The funny thing is I’ve seen him on his break on his laptop in Costa, and I’m pretty sure he was filling out even more job applications.”

Osborne said: “I bring to Greggs the same integrity and attention to detail I bring to all my jobs, and when I quit I’ll hang around outside sneering and criticising my colleagues as they unpack the sandwiches.”

Did you forget I’m a hard Brexit madman? asks Corbyn 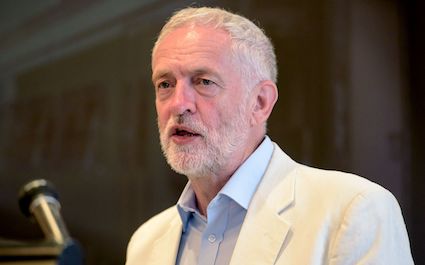 JEREMY Corbyn has reminded the nation that he too is a hard Brexit fanatic, despite seeming nice and having a beard.

The Labour leader said: “Yeah yeah, that White Stripes chant that misses out the second note and all that, but don’t start thinking I’m not in a frenzy like she is.

“She wants hard Brexit so she can create a fascist dictatorship, I want it so I can build a monolithic socialist system. But we both agree you’re getting it damned hard.”

Corbyn admitted that eventually he would sack everyone in the Labour Party because he is now the only politician who ‘understands what Britain truly wants and everyone else will just be getting in the way’.

He added: “I’ll still make jam so that you know I’m nice.”