Sugar and Desmond to get a room

ALAN Sugar and Richard Desmond are going to submit to the simmering sexual chemistry between them.

A YouView spokesman said: “The tension in the office was getting ridiculous so we’ve booked them an afternoon at a nice hotel with sumptuous bedding.

“Hopefully this will sort them out. They were constantly sparring in a flirtatious manner, like Bruce Willis and Cybill Shepherd in Moonlighting, but with more swearing.”

YouView customer Tom Booker said: “I really hope this means the future of the company is secure, because I desperately need to watch Man Vs Food and Cheaters.”

Thatcher statue to be the 'anti-Lourdes' 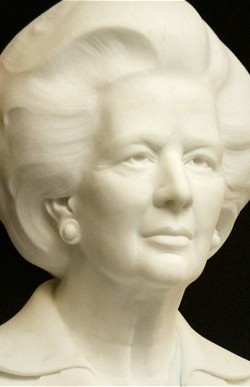 GRANTHAM councillors say a proposed statue of Margaret Thatcher will have the power to make people feel hellish.

Supporters claim that by touching the marble handbag the sighted will become blind, the cheerful will become suicidal and perfectly good pairs of legs will just fall off.

Councillor Roy Hobbs said: “The fact that Labour wants the thing but the Tories don’t shows it already has the power to fuck things up. Your average Tory wants to use giant lasers to carve her face onto the moon.

“Even now, birds flying over the proposed site drop out of the sky and when I cut myself shaving this morning the blood seemed to flow toward its location.”

Hobbs feels it could become a Mecca for people who enjoy feeling absolutely vile, including Emos, people posting cryptically upset messages on Facebook and that woman you sit next to at work who ‘does not like to complain’.

Expert said that when completed, the effect will be that of happiness bending around the statue, so that somebody experiencing joy immediately behind it will appear off to one side.

The sculptor, Nathan Muir, said he wanted the statue to ‘capture the former prime minister’s complexity’, before he was pecked to death by ravens.