“Is that bad? Or is it good because it means there’s more chance of getting the vegetables I need?

“Why am I being given this piece of information?”

Office worker Stephen Malley said: “I am supposed to feel I’ve let Marks & Spencer down by shopping in Primark?

“Is Waitrose good and other shops evil? Is that it?

“I just don’t get this sort of news at all.”

Britain okay with a riot as long as it’s quick 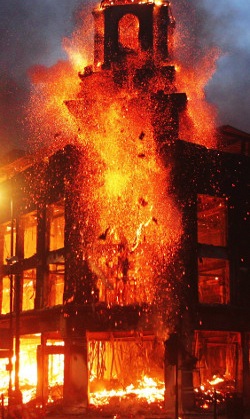 BRITAIN is happy for north London to have a riot as long as it does not drag on for days.

People across the country said the big riot of 2011 was quite interesting for the first six hours but then became noisy and rude.

Martin Bishop, from Hatfield, said: I hate it when the same story is on the news for two days in a row. When it lasts for three days I become furious.

Perhaps the angry people could identify an iconic building, set fire to it and leave it at that.

At which point I will issue my official musings via twitter.

Jane Thompson, from Stevenage, said: I would be absolutely fine with 200 people throwing bricks at a library.

But do it at lunchtime so I can watch it live on my phone while Im having a rice pot.

Nikki Hollis, from Peterborough, added: Yes by all means, but confine the criminality to the outsides of buildings. Many retailers have had a disappointing Christmas and the last thing they need is wide-scale looting.