A WOMAN who promised to do her Christmas shopping at independent retailers this year has clicked ‘Buy Now’ on Amazon less than three minutes later.

Lucy Parry lectured friends and family about the importance of supporting small local businesses, especially during this testing time, then completely reversed her position after making it to the first set of shipping costs.

Parry said: “The first small artisanal crafts website I visited already had me out of my chair and rooting around for my purse because it didn’t know every single detail about me. Which is rude.

“The thought of having to do that nineteen times already had me doubting my resolve. Card numbers are long. There’s only 16 shopping days left. I’m not sure there’s time.

“Then I was asked to pay £6.90 postage on something that was already overpriced at £11, and I closed all those windows and went on Amazon and did all my Christmas shopping in seven minutes without getting off my arse.

“I realise the importance of stopping the world being run by a tech trillionaire who wants to put a robot spy in everyone’s house, but come on. It’s just such an inconvenience otherwise.

Can't be arsed to change your email signature, and other reasons to stay in a shit job 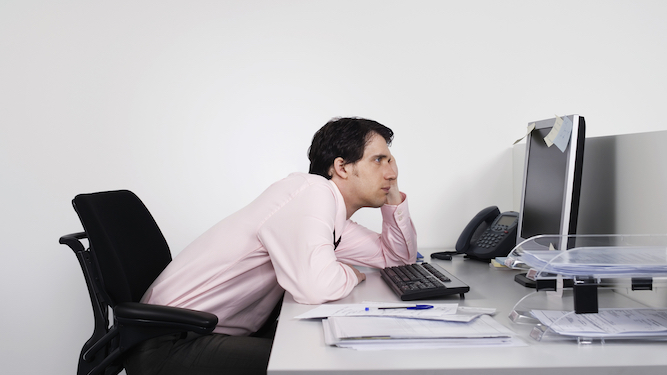 HATE your job? But leaving would involve making minimal effort? Here are five reasons it’s easier to stick it out:

You’ve got holiday left to use up

There’s been no good reason to use your annual leave this year, it’s carried over to next year, you’re not sure if you’re still entitled to it if you resign, and finding out would involve asking someone. It’s fine, you can just quit after you’ve done three weeks in Magaluf.

The commute is fine

If it takes you less than an hour to get to your shithole of an office, why bother getting another better job that you enjoy more and pays you more when it could mean an extra 15 minutes on the bus? That’s surely tipping the work-life balance the wrong way.

Vaguely get on with two co-workers

It doesn’t quite reach the level of banter, but there are two co-workers at your place who relations with are cordial to say the least. Sure, you hate everyone else and they hate you, but what if there aren’t even those two at the new job? Could happen.

When you have a good relationship with your barista, why ruin it? What if the Pret at the new job is 80 yards further away, is a strange L-shape, and you don’t have the same rapport? Take that rapport into account and use it as a reason for staying put.

Can’t be arsed to change your email signature

Changing email signatures take time and effort. You might even have to Google how to do it. So even if your job is categorically shite, why would you want to take that time when you’ve got it just the way you like it? Best stay where you are.

You’ve essentially given up

Let’s be honest – any other job will be equally bollocks because that’s jobs, and will no doubt require a f**kton of paperwork you just aren’t prepared to do. You might as well stick with it until you’re fired.